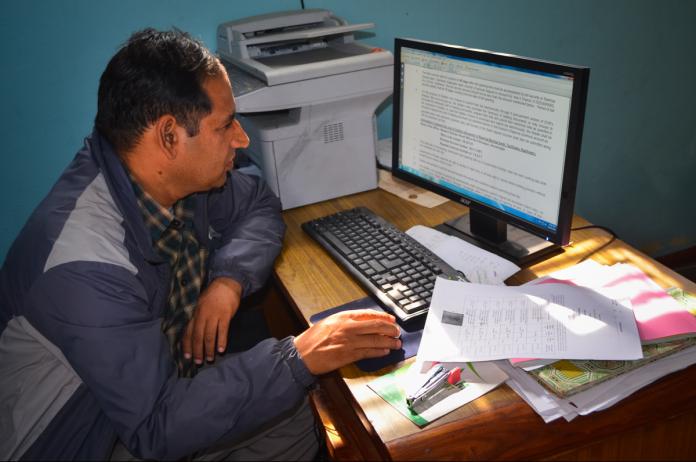 KATHMANDU, NEPAL – It is 11 a.m. and the Baneshwor section of Kathmandu, Nepal’s capital, is bustling. In the office of Ishan Construction Services, owner Krishna Prasad Dhungana is online. He’s surfing the website of the Ministry of Physical Infrastructure and Transport, looking for newly posted construction jobs.

Dhungana, who has been working in construction since 2003, says the government’s shift to online job bidding is saving time and streamlining application processes.

In the past, Dhungana had to file many papers in person, including his company’s eligibility certificate and proof of his citizenship, when bidding for a job.

Before the ministry launched the website in 2010, construction jobs were only published in the government-owned newspaper, Gorkhapatra. Dhungana applied for more than 300 construction and road-building jobs through the old paper process but never won a government contract. But since the new system was launched, he has won five.

Corruption is partially to blame for his lack of success under the old procedure, Dhungana says. The digital process has reduced government corruption, he says.

“To make the result in one’s favor, people would spend money and also hire goons to threaten the other bidders,” Dhungana says. “Now we have got rid of all these things.”

The Ministry of Physical Infrastructure and Transport is not alone in the push to digitize previously paper-heavy processes.

Nepal is nearly five years into an effort to digitize government processes. The project aims to elevate financial transparency, good governance and public access to information.

But claims of corruption remain common in government offices with inadequate budgets for information technology and staff training. Furthermore, databases are subject to hacking. Training for government staff, which began in 2013, is expected to redress these weaknesses.

The Nepalese government has been slow to adopt computer technology. It established a national computer center to train government staff in 1993, but it was not effectively used and ultimately was dismantled, says Ram Adhar Shah, spokesperson for the Ministry of Science, Technology and Environment.

The government introduced a new Information Technology Policy in 2000, but government agencies only began to implement it around 2010.

“The government realized that using computers led to better governance and a corruption-free administration,” Shah says.

All 27 government ministries and the Office of the Prime Minister and Council of Ministers have digitized their day-to-day operations, Shah says. Those 27 ministries include more than 7,000 offices, 50 percent of which are now using computers.

In the five years since Nepal began to implement digitization in government offices, the country has seen increased foreign investment, says Krishna Hari Banskota, former secretary of the Office of the Prime Minister and Council of Ministers.

As evidence, he points to a $190 million loan from Japan for hydropower development in 2013.

“Once the information is online, it is easy to access,” Banskota says. “Therefore, foreign donors have an easy path to invest in Nepal.”

The push to digital processes has helped all citizens of Nepal, says Saroj Singh, 28, a student at Ratna Rajya Laxmi Campus in Kathmandu.

In 2004, Singh had to wait weeks for a newspaper announcement to get the results of his School Leaving Certificate, the final exam in Nepal’s secondary school system, he says.

But now, the Higher Secondary Education Board posts exam results to its website within days after students have taken the test, he says. Test scores can also be accessed via mobile phone.

“Back then, it was not as easy as it is now,” Singh says. “We spent sleepless nights thinking without knowing what happened. But now we are free of this unnecessary stress.”

The digital publication of scores also has reduced corruption in the education sector. When results were published via newspaper, Singh says, buying test scores was common.

“The students who had failed could bribe the officials to make them pass the exam,” he says.

Hari Lamsal, undersecretary of the Ministry of Education, agrees.

“In the past, we used to hear about failed results being ‘amended,’” he says. “But with the online system, everything is entered in the computer. Hence, it is difficult to change the data.”

In the constituent assembly elections held in June, electronic voting was piloted in the Kathmandu, Chitwan, Bardiya and Kailali districts. The results in those areas were “very transparent,” says Shanta Raj Subedi, secretary of the Office of the Prime Minister and Council of Ministers.

“As everything needs to be done and updated online, the work becomes more transparent, and there is less chance of corruption,” Subedi says.

Nepal has long been plagued by lack of transparency and claims of corruption.

The Corruption Perceptions Index, measured by Transparency International, a nongovernmental organization that monitors corruption in civil service and business sectors around the world, ranked Nepal 139 out of 176 – with 1 representing the least corrupt country – in 2012.

Similarly, the World Bank Group’s Ease of Doing Business index, which measures the economic state of countries, ranked Nepal 108 out of 189 countries. A ranking close to 1 means the regulatory environment is conducive to starting and operating a local firm.

Ghimire recognizes the importance of digitization in improving the country’s democratic process.

“In electronic booths, once the vote is cast by hitting the switch, it cannot be changed,” Ghimire says. “When a vote is cast on paper, it can be manipulated when the sealed boxes are transferred to the place where the votes are counted – usually the district headquarters. Therefore, voting in electronic booths is 100 percent transparent.”

But in government offices that do not yet use digital technology, claims of corruption remain common.

The Land Revenue Office, which is responsible for the registration of private land and the administration of state land, and the Department of Foreign Employment are still often accused of corruption, Ghimire says.

“These two are taken as examples because the everyday flow of people is higher in these places,” he says.

Bribes are often offered in these offices to expedite the processes, Ghimire says.

“If these places were digitalized, everything would be online and accessible to many people at a time,” he says. “This could help with reducing the corruption.”

“Gradually, we are also upgrading to online system; therefore, our work is also becoming transparent,” he says. “Our services have become faster, and we hear fewer complaints from the service user compared to five years ago.”

While more than 3,000 government offices still wait for the digitization process to reach them, many of those already using digital procedures say their implementation has not been seamless. Common snags include a lack of training for employees and inadequate budgets for technology maintenance.

Tek Prasad Pulami, assistant registrar of the Office of the Company Registrar, Ministry of Industry, says digital upgrades in his office were not properly managed.

If computers break or need upgrades, his staff is forced to resort to handwritten files again, he says. Even when computers are functional, staff members are not always trained in their use.

“When a staff [member] is transferred from one office to another, it takes months before they can learn about the data system of that office,” Pulami says.

Staff transfers are common every two years, he says.

The government doesn’t have the budget to digitize each office and train the necessary staff members, Banskota admits.

“The work that has been recorded over 58 years needs to be transferred to the computer,” he says. “The government doesn’t have enough budget. Hence, digitization will take some time.”

Still, Pulami remembers the long queue that used to form outside the office before it used computers. Files were stored in cabinets, and finding the right file could take days, he says.

“Till a year back, the service users would queue up in front of the office from 2 a.m.,” Pulami says. “The online technology saves time and is more easily accessible for the service users.”

But as technology advances here, some voice concern that government officials lack the technical expertise to prevent the hacking of sensitive government data stored online.

“Government officials are not technology-friendly, as they cannot operate and maintain a website, nor can they protect confidential government data from hacking,” he says.

The government has been hiring outside contractors and technicians to prevent hacking, Shah says.

Throughout the country, the public sector is outpacing the government in implementing technology, says Narayan Neupane, vice president of the Computer Association of Nepal.

“People can access the Internet through their mobile phones and use credit and debit cards,” Neupane says. “On the other hand, the government has just started installing computers in its offices. Therefore, we still have to stand on queue for hours, for simple things like passports and citizenship.”

“Almost everything takes place online, so we hardly hear about any corruption in this sector,” he says.

In response to allegations of undertrained employees, the government in 2013 launched the Training For All program for people entering government service and government workers in line for promotions. More than 35,000 people have been trained in 2014, Shah says.

Despite glitches in implementation, citizens say they are pleased with the upgrades.

“I had never expected that I could use this type of technology in government offices,” Pulami says. “I am delighted when a file opens with just one click of a mouse.”