Skip to main content
The story you are reading was published on Saturday October 1, 2016. To read more recent stories click here. 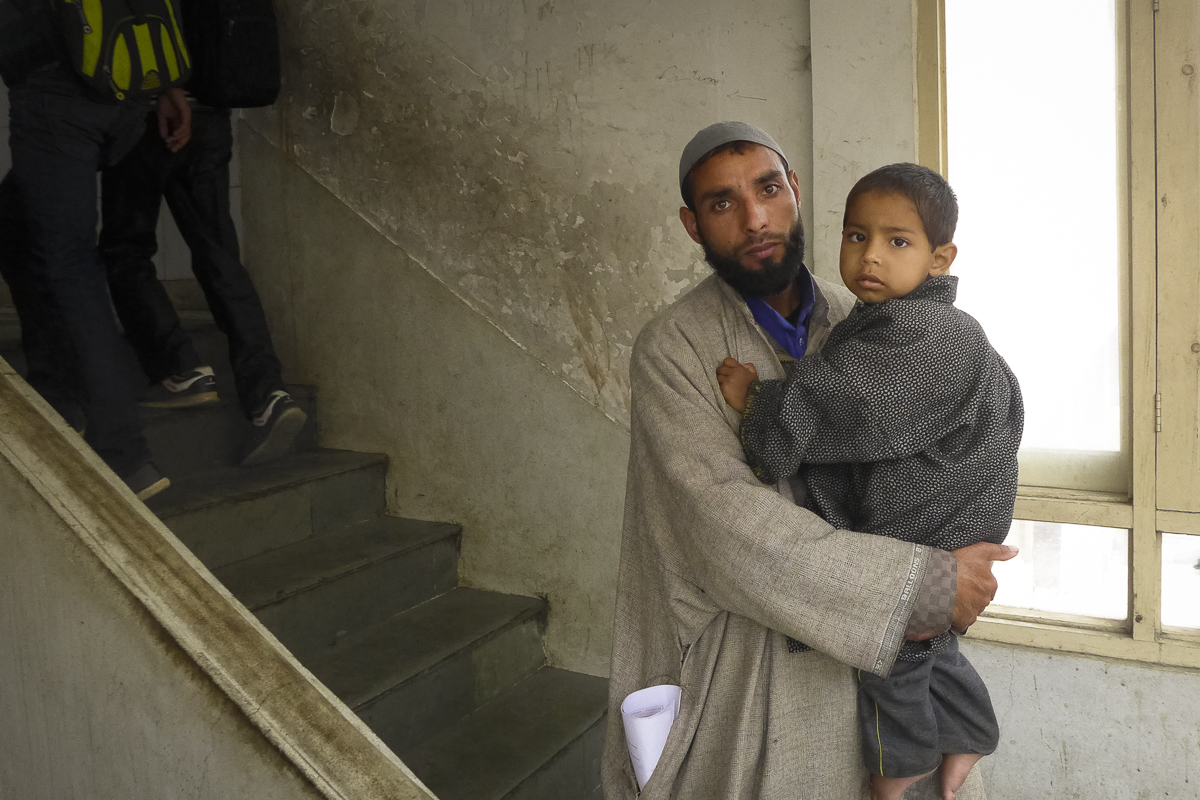 But the medication wasn’t available, so father and son wait to see if an alternative treatment ─ a blood transfusion known in the medical community and among hemophiliacs as fresh frozen plasma (FFP) ─ is available. If it’s not, Bhat and Umar will leave the hospital and return in a few days.

Bhat, a day laborer who earns about 300 rupees ($4.49) a day, when he can find work, brings each boy to the hospital at least twice a month, sometimes together and sometimes separately, based on their treatment dates, he says. The trip is expensive: There are travel costs, and the loss of a day’s wages. The family lives in Kupwara district, and it takes more than three hours to get to the Srinagar hospital. Today’s journey has already cost 200 rupees ($3.29), and it will cost that much to go home.

“Many times my children are not given the factor,” Bhat says, referring to factor replacement therapy. “Most of the time they are given the frozen plasma. I don’t come all the way to just return empty-handed.”

It’s a dangerous situation for hemophiliacs like Umar and Salman. Serious injury and even death are possible if they don’t receive the appropriate care. Factor replacement therapy injects a factor protein into a patient’s blood, enabling it to clot. But there’s a serious shortage of the factor in Kashmir, says Syed Majid, the representative for the Srinagar chapter of the Hemophilia Federation (India) and a hemophilia patient.

“Most of the time we are given fresh frozen plasma,” he says. 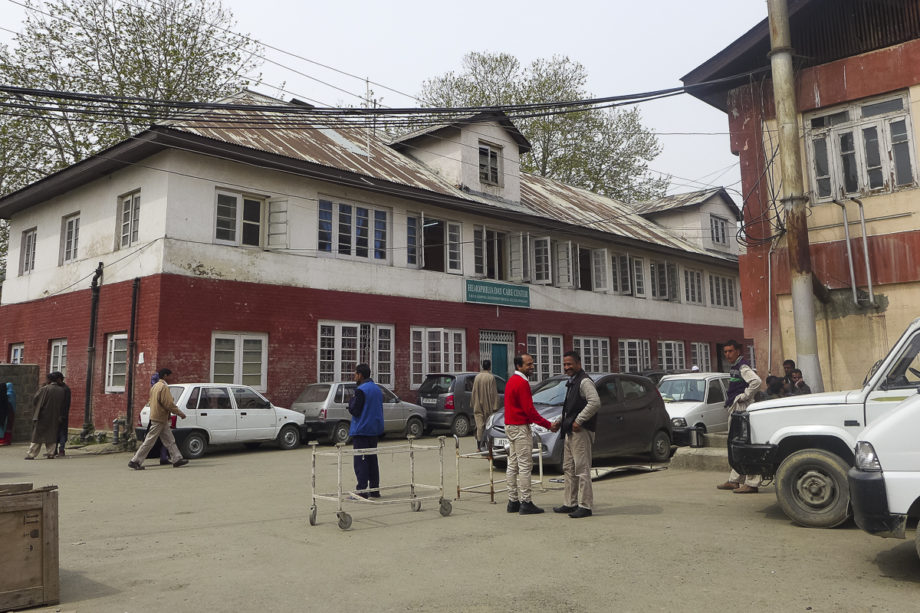 Lack of proper treatment for hemophilia can result in death, warns Dr. Javaid Iqbal Khan, hematologist at the Lal Ded Hospital in Srinagar.

“Hemophilia patients bleed for a longer time than others after an injury,” he says. “There is also internal bleeding, especially in knees, ankles and elbows, and this bleeding can be life threatening, as it damages the organs.”

The antihemophilia drugs should be made available round the clock as per the court decision, but they are still not, and patients are suffering. Syed Majid, the representative for the Srinagar chapter of the Hemophilia Federation (India) and a hemophilia patient

FFP was the standard treatment in the 1950s and 1960s, according to the American Society of Hematology, but that method required large amounts of transfused blood to be effective. Now, in areas with advanced medical technology, factor replacement therapy is used as a preventive measure for people with hemophilia, and FFP treatment is considered risky due to the potential for the transmission of disease via the blood.

Hemophilia is a rare blood disorder: More than 400,000 people worldwide have some form of the disease, according to the U.S.-based National Hemophilia Foundation, but 75 percent of those people receive inadequate treatment or aren’t treated at all.

About 250 hemophiliacs are registered with the Hemophilia Day Care Centre at SMHS hospital, but that number is likely inaccurate. It’s probable that there are additional people living with hemophilia in Indian-administered Kashmir’s rural areas, who cannot travel to Srinagar for treatment, says Dr. Kaiser Ahmad, principal of the Government Medical College at the hospital.

But Majid says this court ruling has had little effect.

“The antihemophilia drugs should be made available round the clock as per the court decision, but they are still not, and patients are suffering,” he says.

The treatment is too expensive for many patients to access it through private health care.

One dose of the factor can range in price from 4,000 rupees ($59.94) to 24,000 rupees ($359.63) at local pharmacies, Majid says. Patients in Indian-administered Kashmir can expect to receive the equivalent of only around five months of factor treatment through the state hospital, as that is all that is available, he adds.

In some cases, patients who desperately need the factor buy it themselves.

The health sector was granted 3.10 billion rupees ($46.5 million) in the 2014-2015 budget, but it’s not clear how much of this funding was earmarked for hemophilia treatment or drugs.

The government released 10 million rupees ($149,867) in 2013 to purchase factor, but more than half of that money was spent paying for factor previously purchased on credit, Ahmad says.

Some hemophilia patients need to take the factor two or three times a day, while others can manage with two or three treatments a month, Ahmad says.

The hospital has specifically requested that the state government make it possible for the institution to have a continuous supply of factor, he says.

“Government is obliged to give patients these drugs, and the public money should be utilized,” he says.

But the treatment isn’t guaranteed even for those who are in desperate need of it.

Patients usually have to be in serious condition before they receive the factor, says Dr. Nisar ul Hassan, president of the Doctors Association of Kashmir. 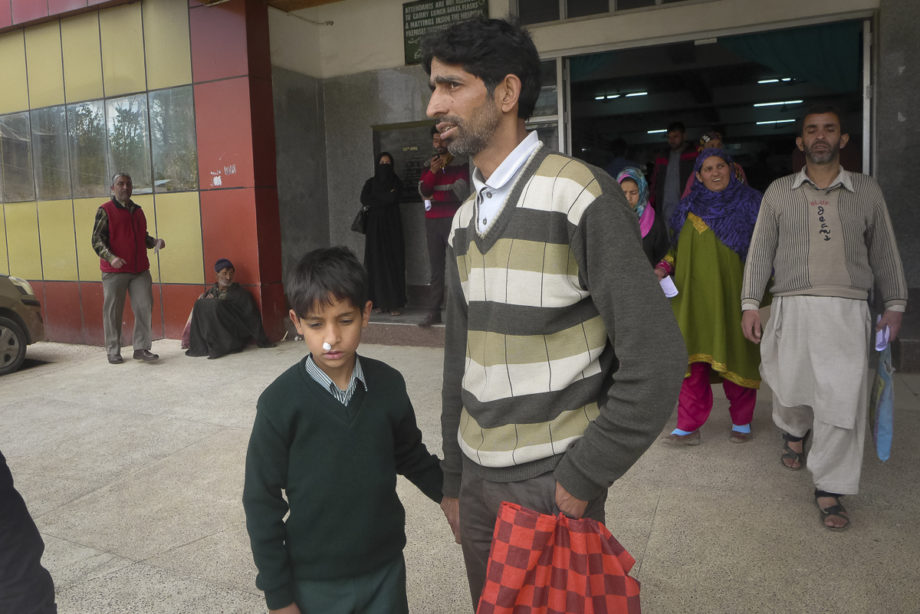 Mukhtar Ahmad and his son Nadeem, 11, wait outside the Hemophilia Day Care Centre. Nadeem, who has hemophilia, often does not get the factor replacement therapy that would improve his quality of life.

“The patients here only get factors when they are bleeding, and that is also after raising a lot of hue and cry,” he says.

Most often, patients are given FFP to increase the factor level in the blood, but this has its own dangers, he says. Some hemophiliacs have contracted hepatitis C and even HIV from plasma that wasn’t screened, he says.

Officials at government hospitals refused to confirm whether any hemophilia patients had contracted those diseases due to non-screened plasma.

Modern medicine has made normal life possible for people with hemophilia around the world, but that’s not the case in Kashmir, Majid says.

“We cannot play and participate in games like patients in the rest of world can,” he says.

Mukhtar Ahmad says he rushed his 11-year-old son Nadeem to Srinagar in June after he injured himself while playing with friends. The family lives in Budgam district, a two-hour trip from the hospital.

“The future is dark,” he says.

Raihana Maqbool, GPJ, translated two interviews from Kashmiri and one from Urdu.