Thanks to successful advocacy and information campaigns, more Central American migrants than ever have applied for asylum in Mexico – but the office tasked with processing the applications can’t keep up. As the office scrambles to meet demand, the families who’ve made the long journey north face months of uncertainty.

María’s oldest son hugs a friend who María worked with at a shelter cafeteria in Mexico City.

MEXICO CITY, MEXICO — When María fled El Salvador with two of her children, she didn’t know what would happen.

“I just trusted in God,” she says.

Her 16-year-old son had refused to join Barrio 18, one of the world’s largest gangs, with members spanning from Central America to Canada. When he refused, gang members threatened to kill his family.

María, who requested that only her first name be used for fear of retaliation, gathered her two oldest children, 12 and 16, and $350 in U.S. dollars and began the journey north to the United States.

She left her youngest child behind. The boy’s father would not allow María to take the 9-year-old with her.

The trio traveled primarily by bus and van. At night, they knocked on doors in search of a place to sleep. At the border between Mexico and Guatemala, they crossed the Usumacinta River on a raft made of tires. 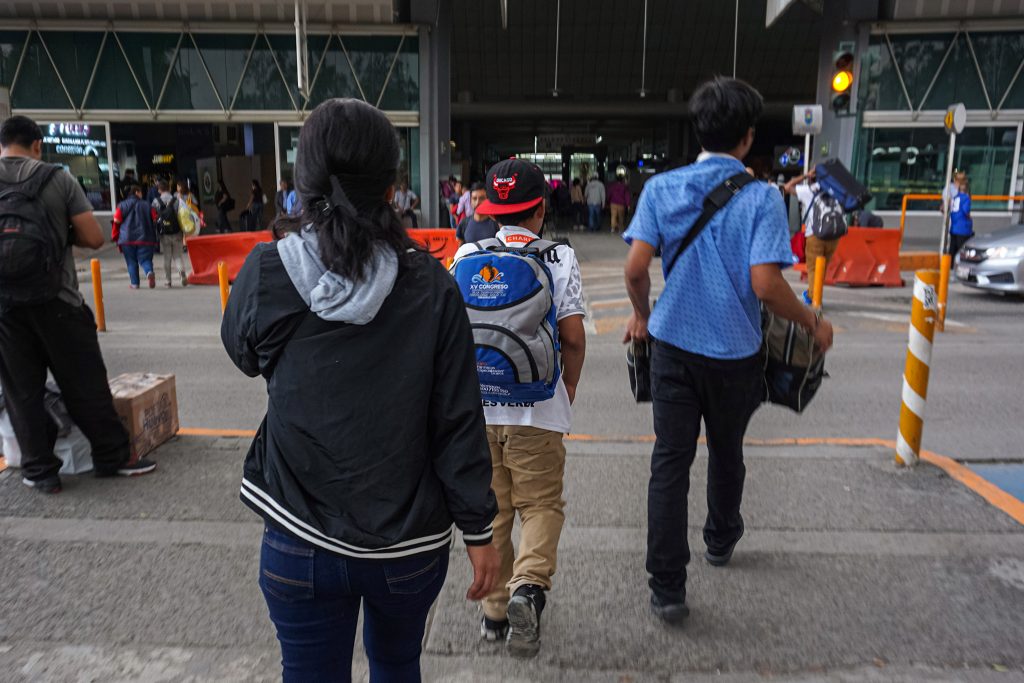 María and her children walk to a bus station in northern Mexico City.

Ten days after they left home, they arrived in Mexico City. It was the end of June. María was out of money, and her children were too scared to continue. Her plan vanished, she says.

Workers at the Casa de Acogida, Formación y Empoderamiento de la Mujer Migrante y Refugiada, an organization that helps migrant women and families seeking asylum, told her that in lieu of continuing to the United States, she and her children could apply for refugee status in Mexico.

But when she went to the Mexican Commission for Refugee Assistance (COMAR), the office that processes refugee applications in Mexico, she learned it could take eight months to a year to process her application.

Mexican law mandates that applications for refugee status be processed in 90 business days or fewer. But a spike in applicants has made that impossible, and María’s situation is increasingly common.

“We could say that it is unprecedented in Mexico,” says Andrés Alfonso Ramírez Silva, general coordinator for COMAR. 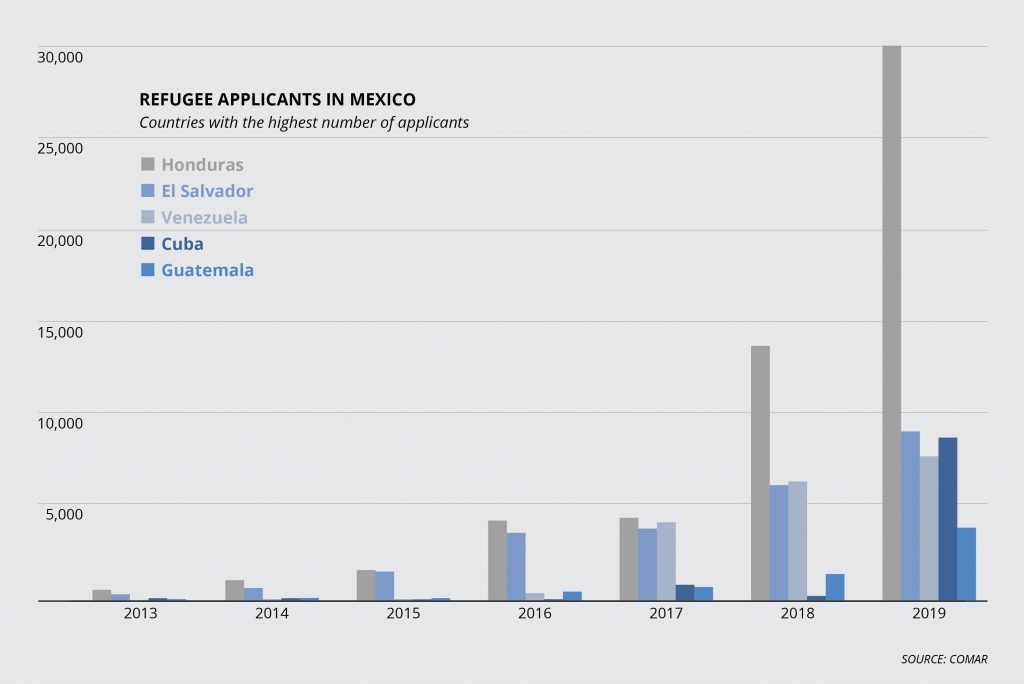 Many, like María, traveled from Guatemala, Honduras and El Salvador to seek relief from rising inequality, political persecution, violence and crime fueled by drug cartels and gangs.

In January 2019, the United Nations High Commissioner for Refugees (UNHCR) interviewed 988 people at the border between Mexico and Guatemala. Seventy percent said their life, integrity or freedom would be at risk if they were forced to return to their home country.

Elba Coria, director of the Clínica Jurídica para Refugiados Alaíde Foppa, an organization that provides legal assistance to those seeking refugee status in Mexico, says that thanks to government outreach and local advocacy efforts, more Central Americans understand that they can seek refugee status in Mexico. And now, more people are willing to apply.

COMAR has four offices in the country and 48 staff members who handle applications, but Ramírez Silva says the organization needs four times the current staff to process the number of applications.

Some delays stem from COMAR’s main office in Mexico City, which was damaged during an earthquake in September 2017. As the office recovered, Ramírez Silva says COMAR suspended processing deadlines at the office, which serves 25 states in Mexico. 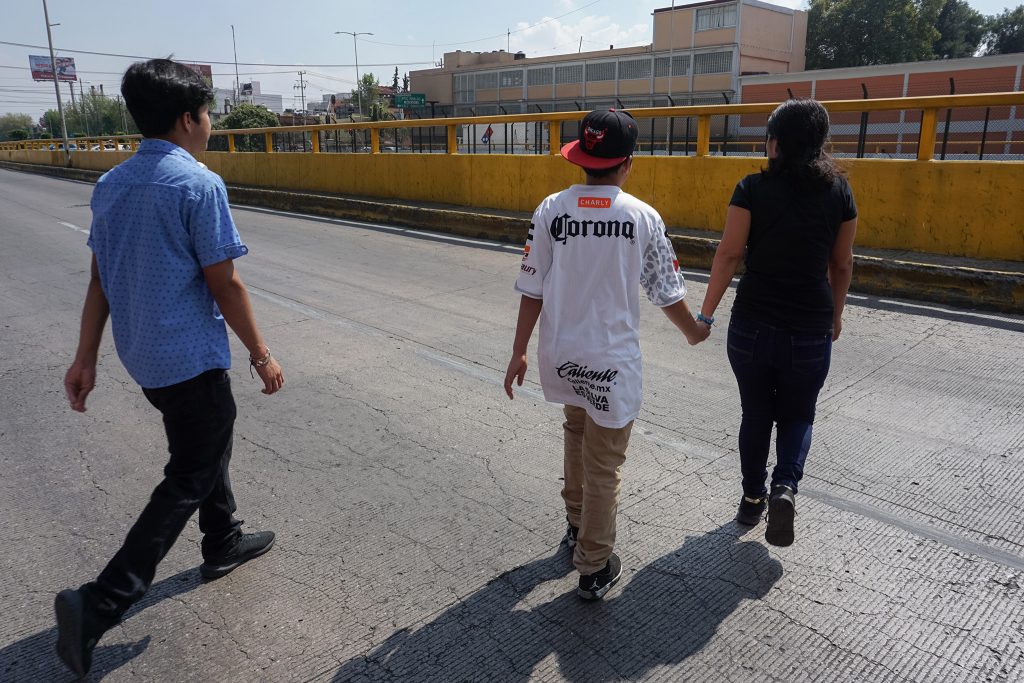 María and her children walk to the bank in Mexico City to collect money for bus tickets.

Now, the Mexican branch of Greenberg Traurig, an international law firm, is representing some applicants as they file injunctions against COMAR, to force them to adhere to established deadlines, says Elba Gutiérrez Castillo, who coordinates pro bono refugee cases.

An injunction can take three to four months, but Gutiérrez Castillo says it can be quicker than waiting for COMAR.

As of July, 12 injunctions have been filed, and the applicants have won two. COMAR resolved some of the other cases before the judge’s ruling, and some applicants gave up, she says.

In response to the influx of applicants, Ramírez Silva says COMAR is working hard to increase capacity. It is in the process of opening three new offices across the country and hiring more staff, thanks to government and UNHCR support.

But COMAR’s efforts have not come soon enough for María. 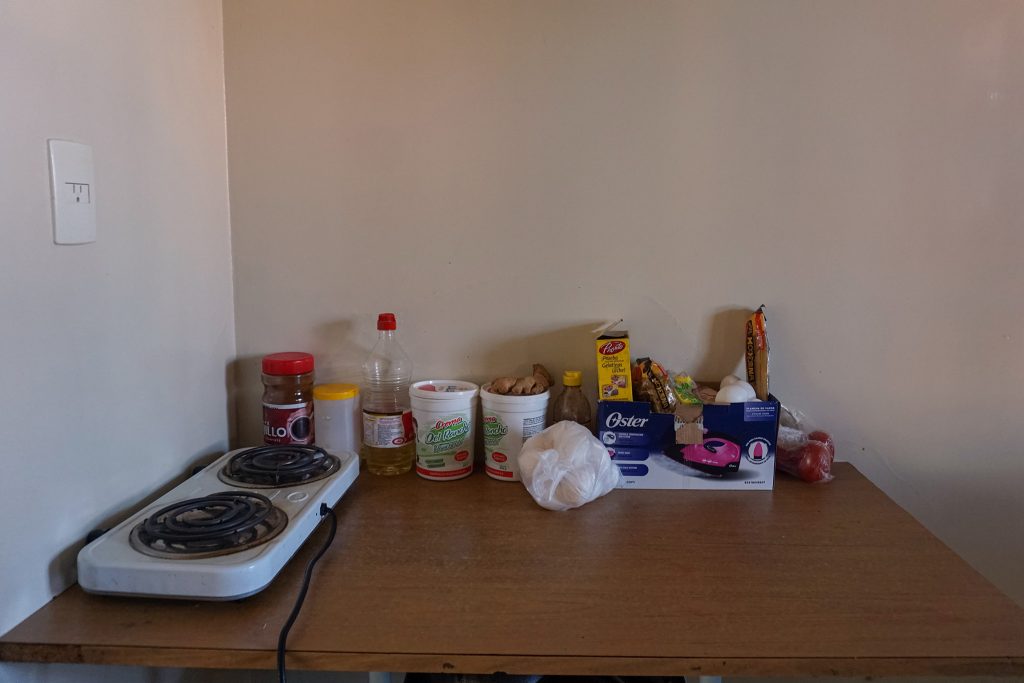 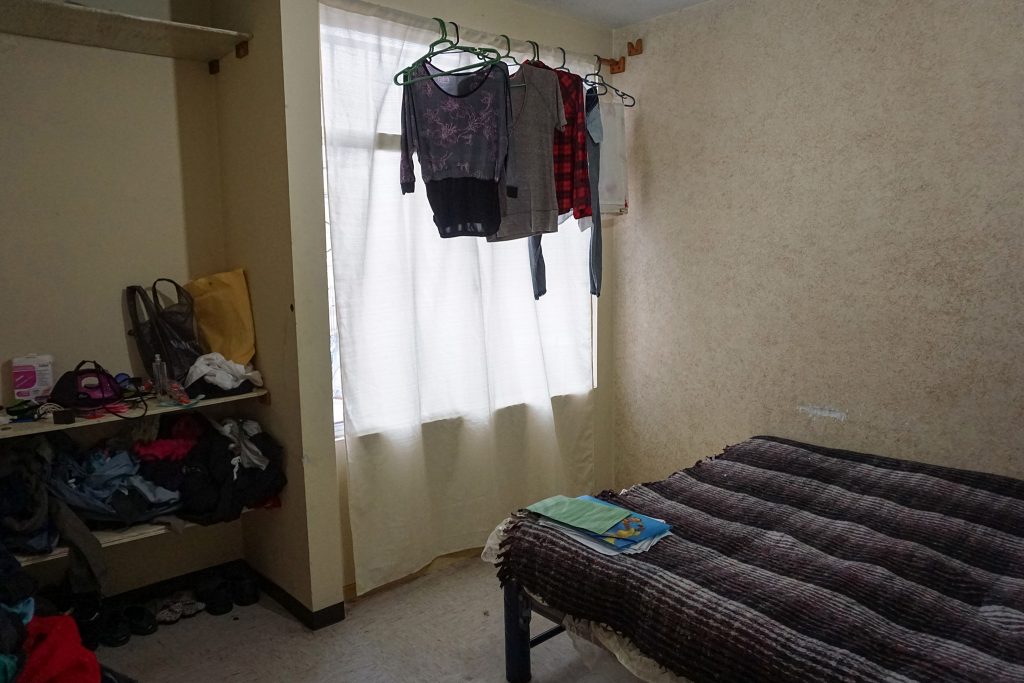 The apartment María rented at the edge of Mexico City. She says the beds were among the things that hurt most to leave.

As she waited for COMAR, María settled in Mexico. She took a job in the cafeteria of the shelter where she and her children stayed when they arrived in the city.

For eight hours a day, Monday through Friday, she cooked, cleaned dishes and served food. On Saturdays she worked half days. When she saved enough, she rented a two-bedroom apartment at the edge of Mexico City.

María and her children spent the first few nights in the apartment on the floor, padding the tile with blankets donated by the shelter until she could buy beds with financial support from the UNHCR.

But she says her salary of 1,000 Mexican pesos a week (about $50) was not enough to cover rent, food and the bus fare to and from work.

After six weeks of stretching her money, she decided to leave the apartment to join relatives in the United States. There, María says, she will be paid in dollars, a currency worth 20 times as much as the peso. 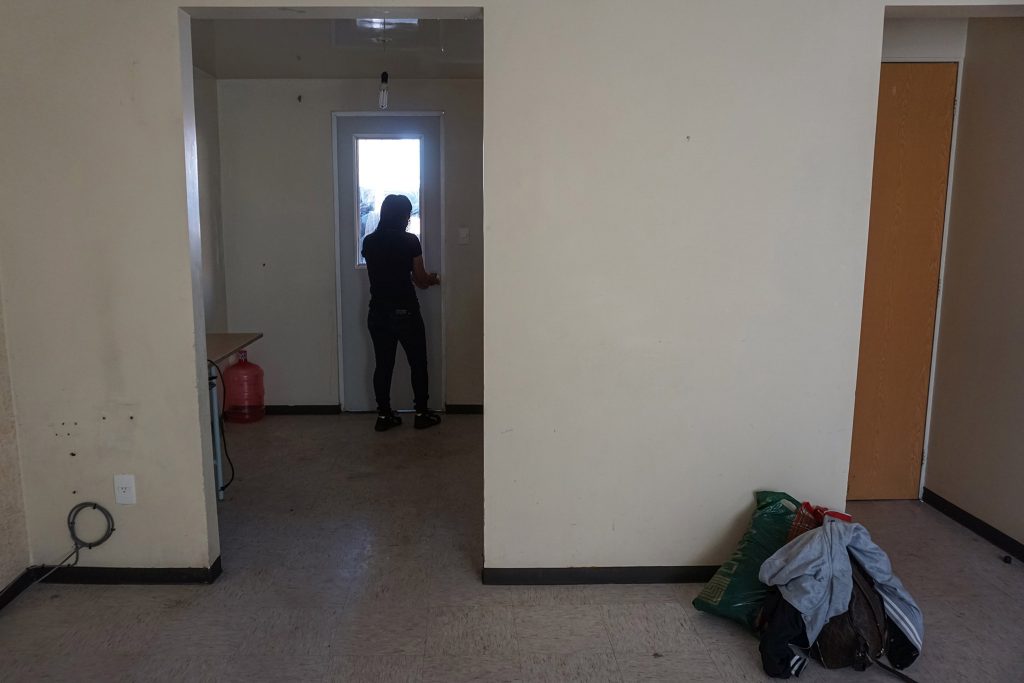 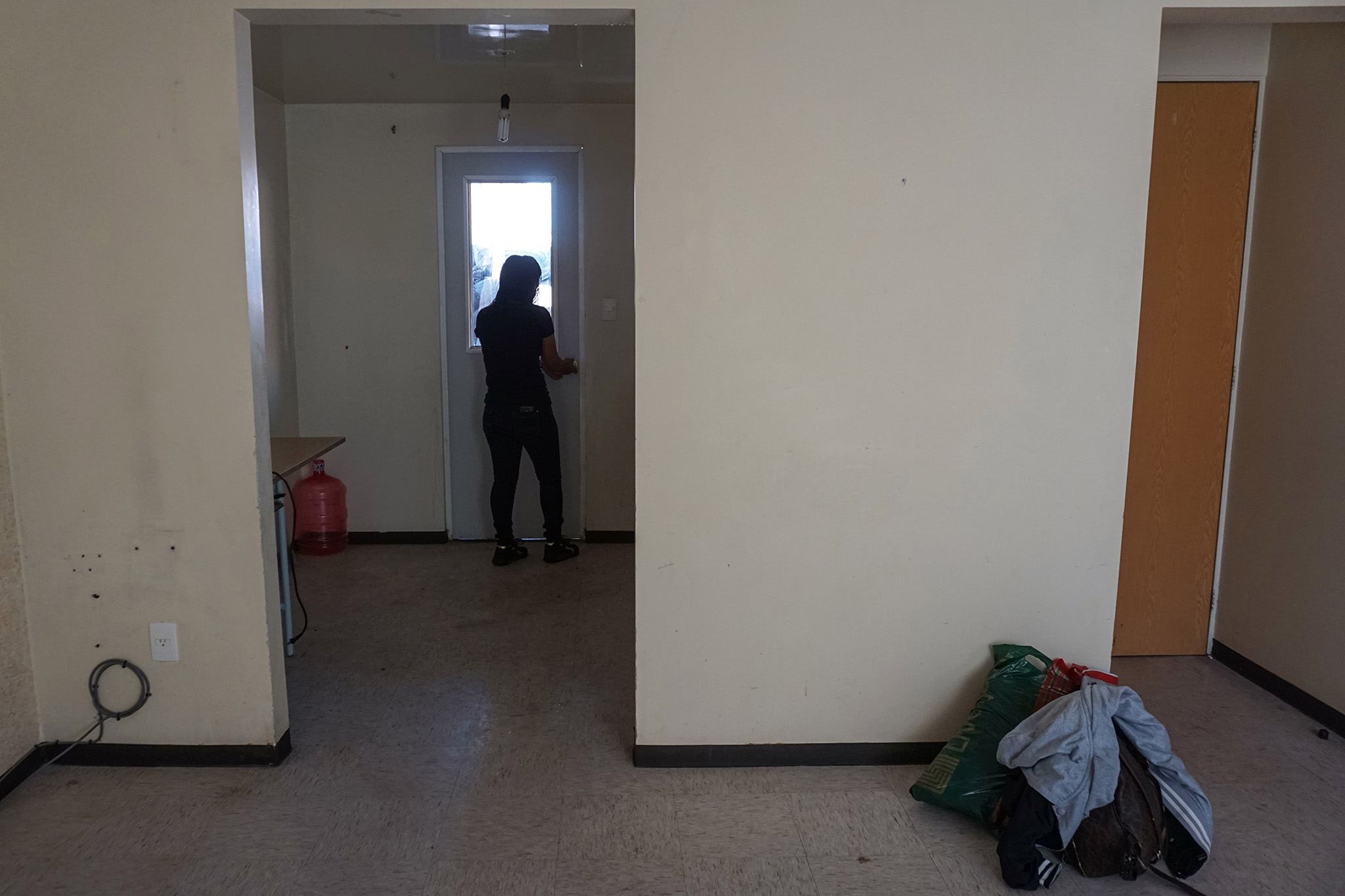 María makes sure the back door of the apartment is locked before leaving for the last time.

On November 5, María and her two children boarded a bus to the northern border city of Mexicali.

She plans to ask for asylum for herself and her children when she crosses into the United States. She says she will try to get a job, likely cooking, until her case is resolved.

She hopes they do not hold her in an immigration detention center or separate her from her children.

In the apartment, she left behind the few things she owned: blankets, clothes, shoes, dishes and the electric stove – remnants of the life they briefly lived there. She says the beds were among the things that hurt most to leave.

“I can’t go back to El Salvador,” she says. “So the only thing I can hope for now is that everything goes well.”

Editor’s note: This story has been updated to reflect the latest COMAR statistics as of January 2020.