Skip to main content
The story you are reading was published on Tuesday June 18, 2013. To read more recent stories click here. 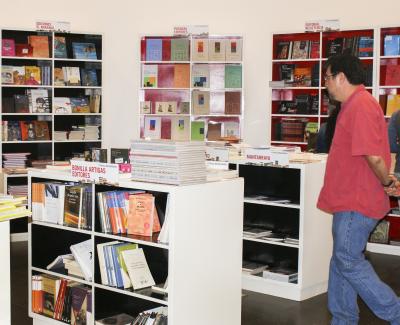 While perusing the selection, Barrán, a university student studying history, holds a book about guerrilla groups in Mexico in the 1970s and the transition to democracy. The publisher is Ce-Acatl, a center of anthropologic, scientific, artistic, traditional and linguistic studies that publishes books about indigenous cultures and social movements.

Looking for books about guerrillas, Barrán says Ce-Acatl’s texts offer a different perspective from that of larger publishing companies. In this way, smaller publishing houses are democratizing the book world.

“Generally, the commercial publishing houses are focused on the well-known authors, the big journalists, the big historians, the major perspectives,” he says. “And because they are very well-known, they become commercial within an intellectual elite. So the topics related with ‘those at the bottom’ are neglected, and it is not easy to find them in large publishing houses.”

The student recognizes that all publishing houses have a bias because each has its own target audience. For that reason, he says that book fairs like the Feria del Libro Independiente are necessary to introduce readers to a wider range of perspectives.

The fair began May 23 and ends June 19. Librería Rosario Castellanos hosted the event for the fourth year in one section of the Mexico City bookstore.

Although the Feria del Libro Independiente is not the only book fair for independent publishing houses in Mexico, it is the major convening in the capital, says Moreno, also the assistant director of one, called Ediciones de Educación y Cultura.

Since 2010, the Feria del Libro Independiente has convened publishing houses that call themselves independent because they focus less on book sales than their larger, more commercial counterparts, Déborah Holtz says. Holtz is the president of Alianza de Editoriales Mexicanas Independientes and the director of Trilce Ediciones, an independent publishing house.

The Alianza de Editoriales Mexicanas Independientes, the only association of its kind in Mexico, does not have data about the number of independent publishing houses in the country, Moreno says. But it is preparing a census, which it plans to finish in six months.

Independent publishers distinguish themselves from commercial publishing houses by focusing more on art and passion than profits, Holtz says.

“Our scales are tipped more on the artistic and passionate side than on that of the sales and advantages of publishing certain books,” Holtz says. “That is what distinguishes us: that we are out of that commercial circuit.”

Because of this mission, independent publishers can prioritize quality, Holtz says.

“Our mission is not to think how many books are going to be sold,” she says. “We do not ask ourselves that. We say: ‘This is a great book. We have to publish it!’”

Most books on display in the fair carry the names of unfamous authors, who also emphasize the quality of the texts, Holtz says.

“There is an optimum quality and an excessive care,” she says of the work. “They are different and very audacious proposals in all the areas: poetry, fiction, essay, children’s books.”

Attendees of the fair can find unusual texts: handmade books, flip-books, books with cardboard covers and object books, which are books in the shape of various items. One publisher of e-books even features a catalog of its offerings.

The participating publishing companies have audacious names and unusual editorial focuses, such as Editorial Resistencia, which means Publishing Resistance in Spanish, and Producciones El Salario del Miedo, or Salary of Fear Productions. “The universal right to laziness,” is the motto of Tumbona Ediciones, a publishing house that aims to promote neglected genres, such as the essay.

Marina Ruiz is the publisher of Astrolabio, which publishes handmade books, object books, and books that authors design from the covers to the printing techniques. The company prints just 50 copies to 200 copies of each text. Ruiz says there is an audience eager for these new kinds of books that independent publishing houses offer.

Gina Arizpe, 40, a visual artist, says this is her first time shopping at the book fair. She likes the books that Alias publishes because it makes works about contemporary art more accessible to readers. The publishing company features texts translated into Spanish that previously were available only in other languages, discontinued texts and affordable paperbacks.

“It is very interesting this democratization of knowledge by means of publishing texts that have not been republished and that are lost in history,” Arizpe says.

For publishers, the fair offers a rare and affordable opportunity to disseminate their work.

The main challenge facing independent publishing houses is the lack of space to distribute their books inside bookstores, Holtz says. In Mexico, there are only 500 bookstores to serve a population of 120 million people.

“There are very few bookstores,” she says, “and those that exist are saturated with products of the large publishing houses chains.”

There were nearly 1,200 bookstores in Mexico – about 490 companies and 710 branches – as of 2012, according to the Cámara Nacional de la Industria Editorial Mexicana, an association of the principal publishing businesses in the country.

In addition to the low number of bookstores, they also charge publishing companies high percentages of sales for distributing their books, ranging from 45 percent to 55 percent, Moreno says. Yet publishing houses must also pay for the printing, design and copyright as well as pay the authors, copy editors and designers.

Bookstores constitute the second-largest distribution channel of books for publishing companies in the private sector, just below sales to the government, according to the Cámara Nacional de la Industria Editorial Mexicana.

But is also difficult for independent publishing houses to obtain contracts with the government to buy their books, Moreno says. Brand awareness is low.

The bookstore does not charge the publishers to hold the fair in part of the store. So the alliance charges each publishing house only enough to cover the cost of the fair, including paying for assistants; the opening cocktail event; the printing of catalogs, fliers and banners; and the bookstore staff.

This means publishers do not have to supervise stands because the bookstore’s shelves instead display their works, which Ruiz calls another advantage of the fair.

The bookstore that hosts the event belongs to Fondo de Cultura Económica, the publishing institution of the Mexican government that edits, produces, sells and promotes its own cultural works. In addition to supporting smaller publishing houses through this book fair, it also supports larger publishing houses as well.

As the Alianza de Editoriales Mexicanas Independientes wraps up this year’s fair, its leaders voice optimism about sales and expansion.

In the future, the alliance aspires to expand the book fair to a countrywide event that travels to cities around Mexico, Moreno says.

There is a market hungry for independently published books, Ruiz says, starting with the publishers themselves.

“We are serving an audience that is interested in this type of books,” she says. “We know that it exists because we are the first in need of this type of works, and we are seeking the spaces that permit us to approach this audience.”