Skip to main content
The story you are reading was published on Wednesday October 10, 2012. To read more recent stories click here. 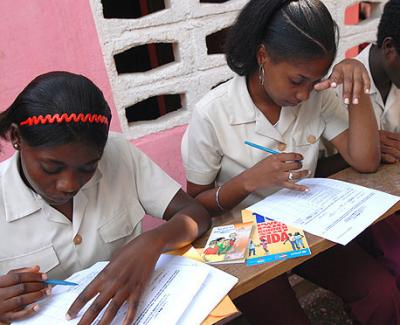 JÉRÉMIE, HAITI – “Young girls here start having babies when they are only 14 years old,” says 17-year-old Bernia Chalestra of her peers.

But Chalestra, a high school student in Baryadel in Haiti’s Grand’Anse department, says this is beginning to change, thanks to a new club. Chalestra is a member of a sexual and reproductive health education club that helps young girls avoid early pregnancies, sexually transmitted diseases and HIV.

CARE, a humanitarian organization dedicated to fighting global poverty, helped form the club, Chalestra says. Franck Jean, a nurse at a local community clinic, leads the group. The club aims to help girls better understand how their bodies work, how sexually transmitted diseases are spread and how to avoid getting pregnant before they are ready.

“Thanks to the club, we avoid having babies before we are ready, and we also avoid getting infected with illnesses that potentially could cause us to die,” Chalestra says.

She says she is using her new knowledge to educate younger girls.

“I have participated in sex education, and I have been able to help other young girls,” Chalestra says. “I will fight for this so that it can continue.”

Lyndia Francois, 17, also a resident of Baryadel and a member of the same club, says that it was only luck that she didn’t have a baby before learning about safe sex methods.

“I was already sexually active, and if it was not for the club, I could have had two kids already,” she says.

Francois stresses how important it is for other girls like her to learn about their bodies.

Sexual and reproductive health education is not part of the formal education curriculum for girls in Haiti, especially in rural areas. Now, thanks to local nurses and international and local nongovernmental organizations, sex education clubs are on the rise for girls who crave information to avoid early pregnancy and the contraction of sexually transmitted diseases. The girls also go on to become advocates of safe sex among their peers. The girls ask for continuing education as organizations and hospitals plan to expand programs to other communities in Haiti.

In Haiti, 34 percent of males ages 15 to 19 in Haiti have a comprehensive knowledge of HIV transmission, compared with 31 percent of females, according to UNICEF. Only 29 percent of females between 15 and 24 who had sex with a partner with whom they were not married or cohabiting during the year before being surveyed say that their partners used a condom. And 15 percent of Haitian women ages 20 to 24 give birth before the age of 18.

Carmensize Guerrier, a nurse in Petite Rivière, a community in the same town as Baryadel, Dame-Marie, says that sex education itself isn’t a new concept in the country. Still, it is not required or guaranteed as part of young people’s education.

Chalestra says that having babies too early is the downfall of young girls in her community. Women need to be aware so they can make smart decisions, and this awareness needs to be present daily in the form of continued sex education, she says.

“Young girls are the hope of a country,” Guerrier says. “They need to be protected. They need to know about sex, when they can have it and how.”

Guerrier says that sex education and life skills clubs began forming more rapidly after the 2010 earthquake, when young women lived in camps, which heightened their risk for sexual abuse.

The sex education clubs for girls in the Grand’Anse are the efforts of several international organizations, including CARE, Haiti Red Cross Society and Catholic Relief Services, as well as local ones such as Fondation pour la Santé Reproductrice et l’Education Familiale.

The clubs have helped fill in the gaps of the informal structure of sex education in schools, which is sometimes offered in cities but often doesn’t reach residents of rural and mountainous areas, Chalestra says.

Guerrier, dressed smartly in a black and white blouse and a black skirt, projects a young spirit, which serves her well in her work with young people.

Guerrier runs a sex education club for 49 young girls in Petite Rivière as well as groups in Port-au-Prince, Haiti’s capital. Guerrier says the members of her club are now more familiar with their bodies. They also know what sexually transmitted diseases are and how best to avoid contracting them.

She not only educates the girls on issues related to sex, but she also integrates cultural activities into the club meetings and discussions about how the girls envision their futures.

Samydio Dolcine is one of the girls who participated in one of its sex education workshops. The workshop, which drew more than 80 girls, featured education on sexual issues as well as social activities.

“This is a real gift that I received,” Dolcine says.

Pierrette Romain, 18, who studies at the University of the Nouvelle Grand’Anse, says that if she did not receive sex education from the Catholic Relief Services, she might not have been able to study at the university because of an unexpected pregnancy.

Romain says the knowledge she received will guide her for the rest of her life.

“All young girls should receive sex education,” she says. “Without it, our lives could be destroyed.”

Sex education is beginning to take off outside of Dame-Marie, just as Chalestra wishes.

Stanley Verrier is the medical director of the hospital in Anzdeno, a fishing village southwest of Dame-Marie. Verrier says the hospital has a group of peer educators, and he is recruiting a public health nurse so that he can create a sex education club for girls.