Skip to main content
The story you are reading was published on Wednesday February 17, 2016. To read more recent stories click here. 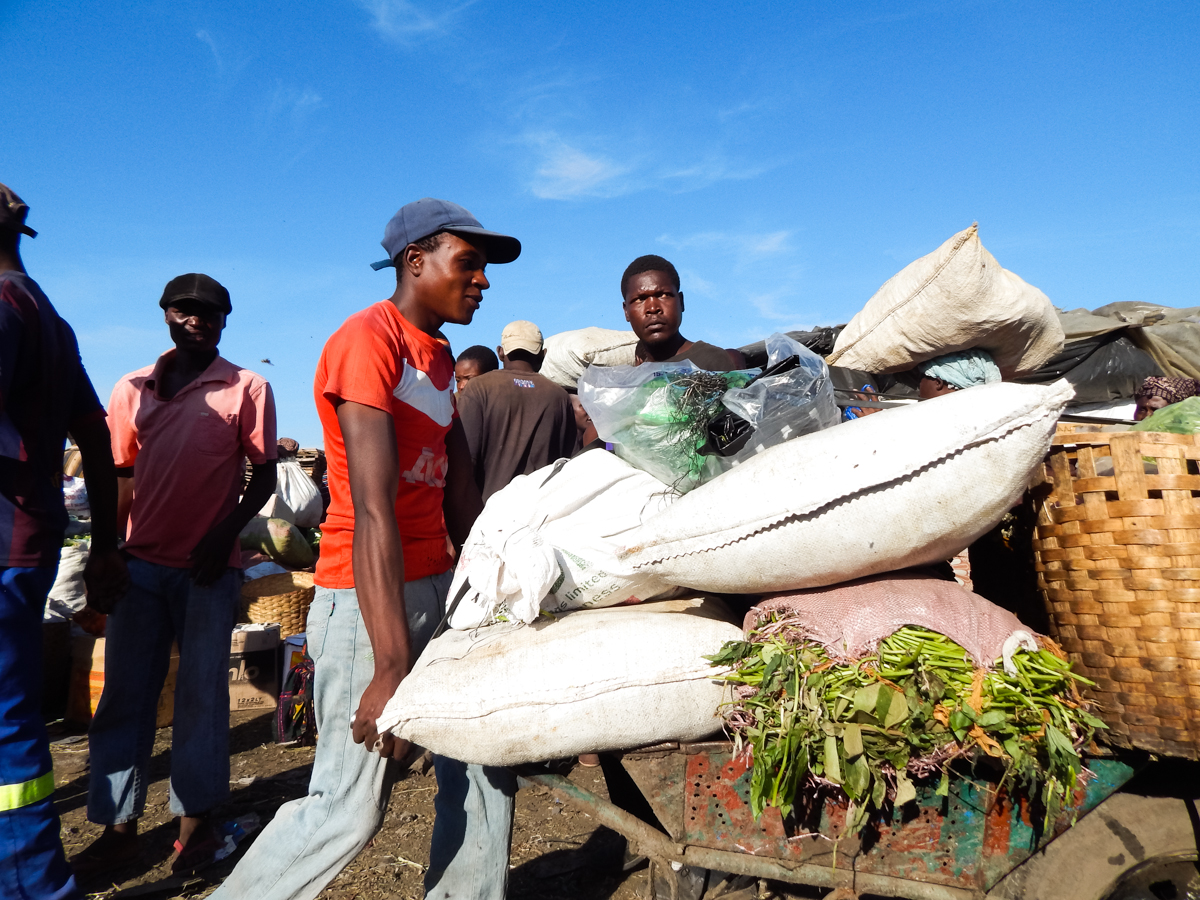 LUSAKA, ZAMBIA ─ Traders rush through the chaotic Old Soweto Market in this capital city, dodging to avoid being hit by protruding modified wheelbarrows that are all over the market.

The wheelbarrows, locally known as Zamcabs, are a major mode of transportation at the market and everywhere in the city. Innovative men modify this gardening and construction tool into a vehicle for transporting heavy loads from Lusaka’s markets to locations throughout the city and suburbs.

The wheelbarrows are fitted with car tires and can carry goods weighing up to 300 kilograms (661 pounds), says Manson Njobvu, a welder who modifies wheelbarrows.

“This is good business,” says Boyd Sakala, a wheelbarrow pusher. “But you need to be energetic. They say a poor man’s capital is his strength, and that is what we have.”

Vincent Mwale, the minister for sport, youth and child development, says these innovations help ease joblessness. Almost 8 percent of the labor force in Zambia was unemployed, according to the Zambia Labour Force Survey Report 2012.

But you need to be energetic. They say a poor man’s capital is his strength, and that is what we have.Boyd Sakala, a wheelbarrow pusher

Buses and taxis are readily available in Lusaka, but traders opt to hire wheelbarrow pushers because the service is cheap. Wheelbarrow pushers charge 7 kwacha (62 cents) for a distance a taxi would charge 30 kwacha ($2.66).Buses and taxis have hiked their fares in recent months, after the Energy Regulation Board increased fuel prices up to 1.13 kwacha (about 10 cents) per liter in July 2015.

“Imagine transporting all my goods in a taxi. It means I cannot even make any profit,” says Matti Banda, a vegetable vendor who buys her products at Old Soweto Market. 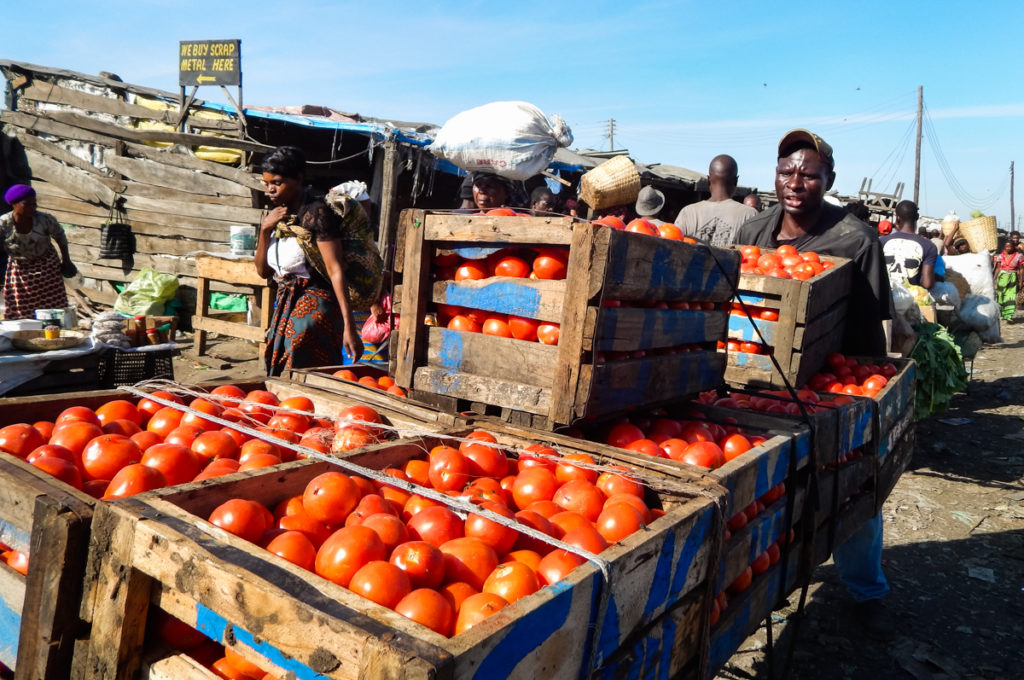 A man moves tomatoes from Old Soweto Market to Chawama compound, an informal settlement in Lusaka. 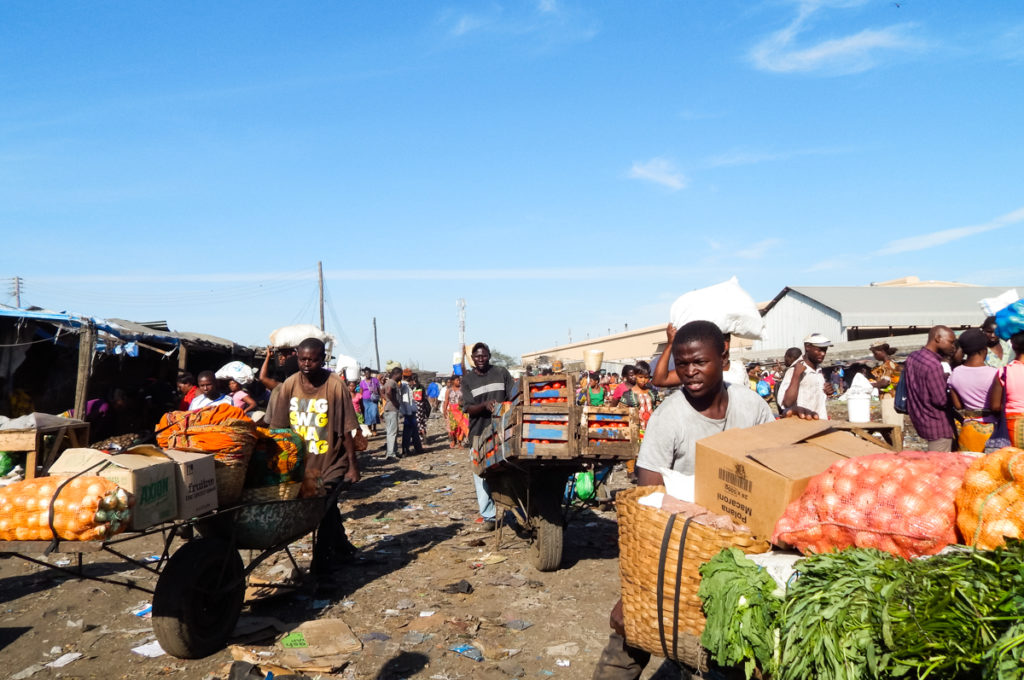 Wheelbarrows are a common mode of transportation for small-scale traders in Zambia. 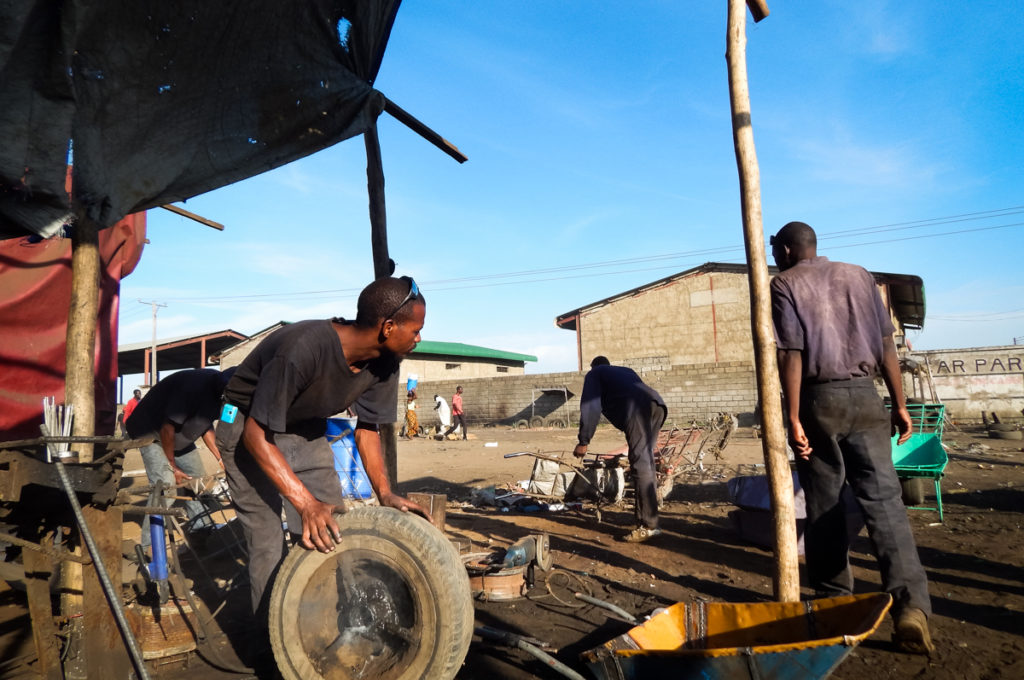 Manson Njobvu, a welder, modifies wheelbarrows at Old Soweto Market and sells them at 450 kwacha ($40) each. 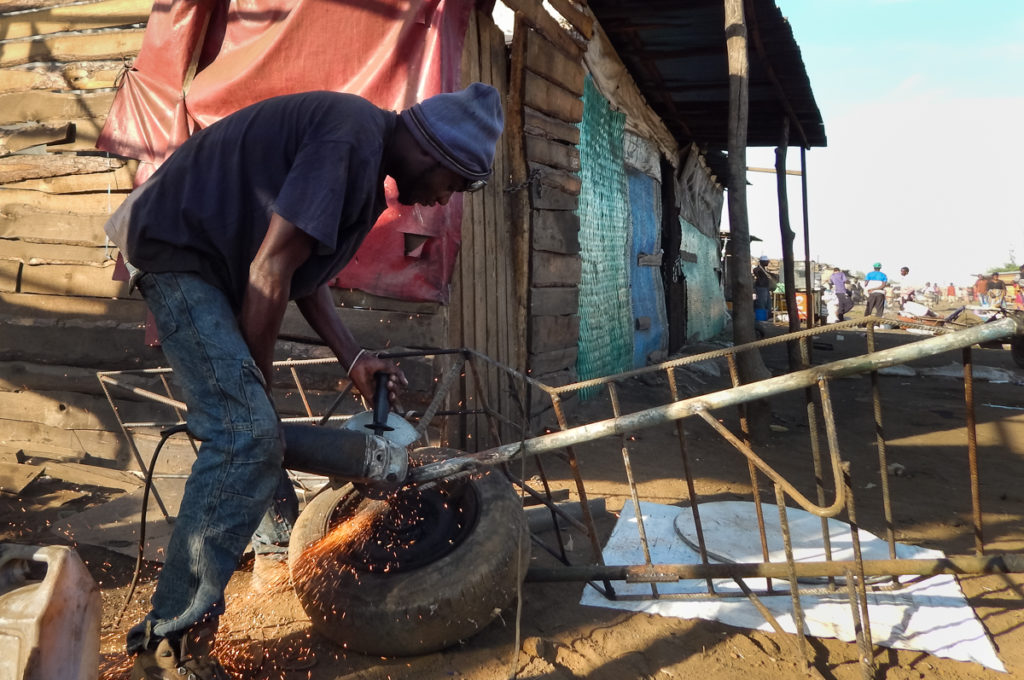 Chileshe Musonda, a welder who works with Njobvu, replaces the wheel of a wheelbarrow with a car tire. 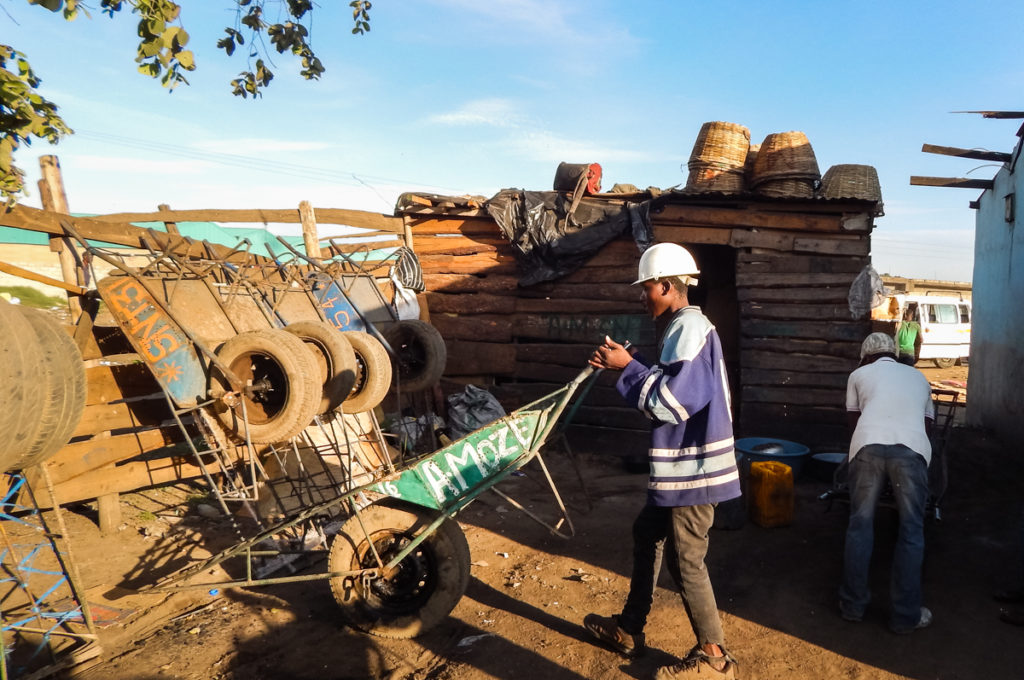 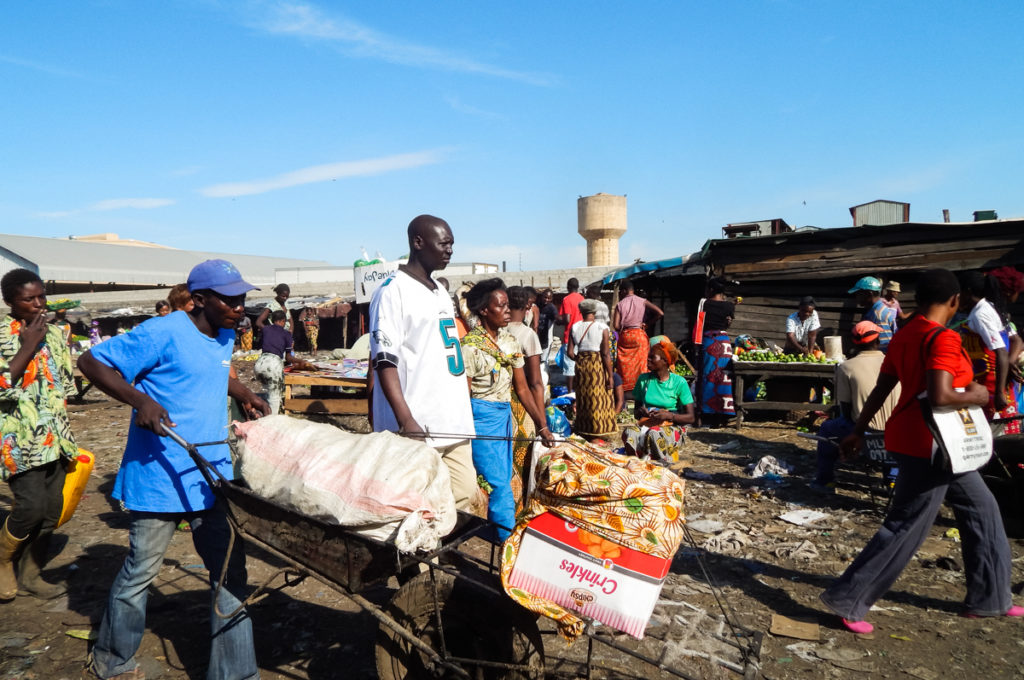 A man walks alongside a wheelbarrow pusher he has hired to carry his goods at the Old Soweto Market in Lusaka. 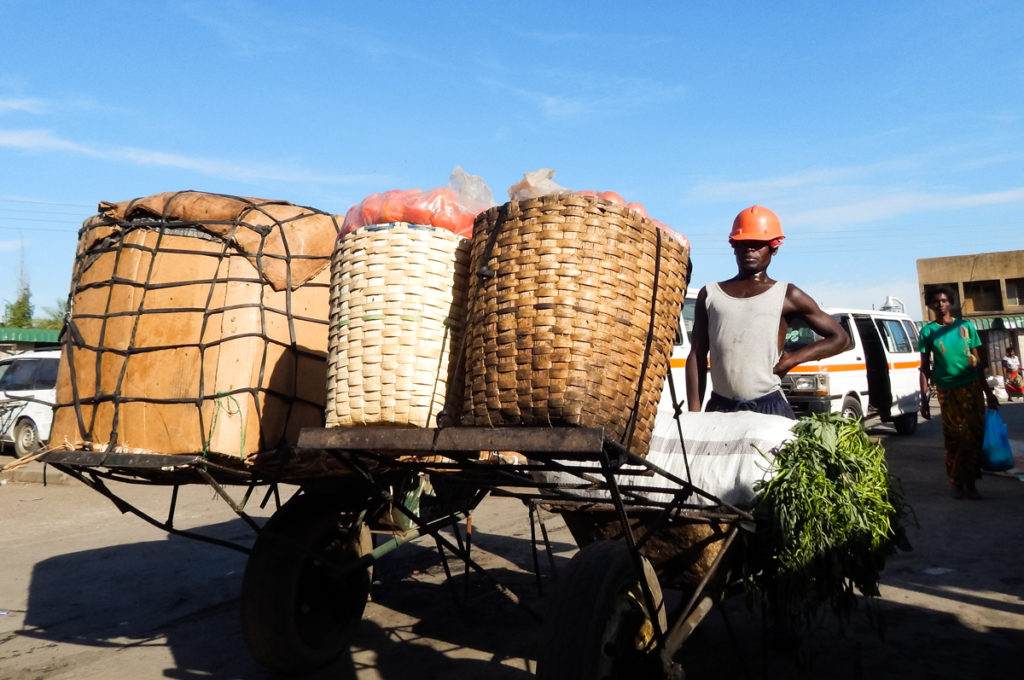