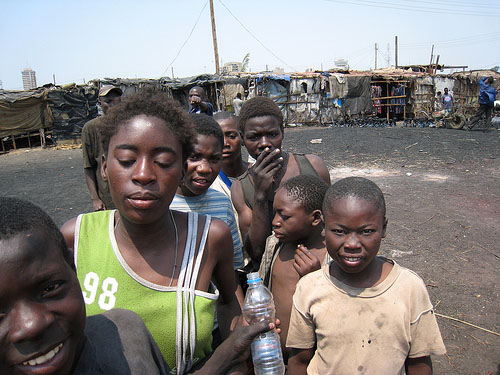 The boy, who lives with his grandmother, was visiting his mother last month when a group of men gang-raped him.

At around 8 p.m., he left the house to use a pit latrine nearby, since his mother’s house does not have a toilet. He says five men wearing masks grabbed him and forced him inside the small outdoor bathroom. He says he started to cry, but the men threatened to beat him and covered his mouth with their hands.

“They held my hands, and each one of the men made me touch their private part,” he says shyly.

Then, they raped him.

“They took turns,” he says. “The men forced me to face [the] wall, and my face was hurt when they hit me on the rough wall.”

Moses, who still has bruises on his forehead, says the first man was tall and didn’t put on a condom when he sodomized him.

“After he finished, another man told me to touch his manhood and he raped me with a condom on,” Moses says.

Then, a third man raped him.

“I feel pain in my stomach, and my private parts [hurt] when I sit down,” he says shyly, laying his head on his grandmother’s lap.

Monica Chilabe, Moses’ mother, says that as she and others approached the toilet, the men ran in all directions and some jumped over the toilet wall. But she says two men were caught as they tried to escape.

“It was unbelievable what I saw, old men with children [of their own] sodomizing my child,” says Chilabe, who has been in shock ever since.

Chilabe says they quickly rushed Moses to the hospital. She says Moses sustained serious injuries and couldn’t control his bowels. The nurse checked him in and gave him antiretroviral drugs as a precaution against HIV.

“My son[’s] anus was like a hole,” Chilabe says. “I could see inside. He was badly hurt, and blood and some sperm were seen coming out. He had injuries all over his private part[s] and forehead.”

“My grandson[’s] life has been destroyed,” says Eunice Phiri, his grandmother. “He always complains of stomach pains.”

She says he used to be a healthy, brave child who loved playing outside with his friends, even after dusk. But not anymore.

“Since the incident, he is so scared,” she says. “He cannot go outside the house when it is evening. He screams, and at times he will just be looking at you when you are calling or speaking to him.”

In Zambia, child abuse has been on the rise in recent years. Some blame Zambia’s dual legal system, citing discrepancies between statutory and customary law. Others target the culture of silence in homes and schools that accepts and covers up abuse.

As many as 70 percent of Zambian children have been physically abused, according to UNICEF’s latest Situation Analysis of Children and Women, released in 2009. Abuse occurs inside and outside the family and is more common among younger children. The analysis indicates that sexual abuse is extra problematic because it is taboo to speak about sex – and especially homosexuality – in Zambian society, and most perpetrators are men in positions of authority whom children know and respect.

Zambia is signatory to multiple international instruments protecting children’s rights. Yet its dual legal system of statutory law – written law – and customary law – legal norms that have developed over time – perpetuates abuse, according to a 2010 report by Children in Need Network, CHIN, a network of Zambian children’s rights organizations. For example, while statutory law outlaws child marriage, customary law permits it.

“The customary law approves early marriages, and immediately [after] a minor girl is defiled, the culprits pay for lobola [bride price], and the child is married off,” Sampa says.

According to a CHIN study, customary law perpetuates incest and child abuse within the home, where women and children are subservient to adult males and family issues are kept quiet, creating a culture of silence. Sexual abuse is prevalent in homes and schools despite statutory law.

The minimum sentence for child sexual abuse is 25 years, says Traceford Kasele, national coordinator for the Victim Support Unit of the Zambia Police. Yet perpetrators are not deterred by this possibility, as Kasele says 2,605 cases of child sexual abuse were reported last year.

“We receive cases of child defilement on a daily basis,” Kasele says.

Still, the UNICEF analysis suggests the frequency of abuse may be even greater. While many cases are brought to the support unit, families often later deny or cover up such abuse when it occurs inside the home, according to the analysis.

But for some, even if the abuse is reported, justice isn’t served.

One of Moses’ relatives, Hazel Phiri, says the two men apprehended by the police in Moses’ incident were released after only three days in jail. Phiri says prosecutors said they would update the family. But there has been no news from the courts for more than a month. Phiri says the family was shocked to learn the men had been released weeks ago without the family’s knowledge. Moses’ relatives say they now see one of the men around town.

“Most police officers lack knowledge on the seriousness of sexual [offenses against children], and it is wrong to release the perpetrators without the knowledge of the family,” Sampa says.

Kasele says perpetrators in sodomy cases may be released on bail if a family member pledges in writing to make sure they don’t flee before their court cases. He says police do inform the children’s families of the perpetrators’ release.

The Zambian government, police and international and national organizations say they have been working to tackle rising child abuse.

Dora Siliya, Zambia’s education minister, asked interest groups last month to partner with the government to find a lasting solution to eliminate increased child abuse in schools, according to the Times of Zambia. She called for an education policy to address abuse and on local leaders to expose all cases of child abuse in schools so that perpetrators can be punished. Last year, the government banned students from visiting teachers’ homes, according to Zambia Daily Mail, and warned school districts of severe punishments for shielding abusive teachers.

In 2009, President Rupiah Banda announced a two-year national communication campaign strategy to combat gender-based violence against children and women. He said rising abuse made violence one of Zambia’s largest “enemies,” second only to HIV and AIDS, which is also fueled by sexual abuse. Child abuse laws have also been under review, he says.

Sampa says UNICEF has been working with the support unit, the YWCA, and the Ministry of Community Development and Social Services to help children. She says UNICEF is also working to educate police officers on how to deal with child abusers.

Kasele says the unit is working to sensitize the community to child sexual abuse by distributing posters and airing radio and TV programs. Kasele also says police send children who are sexually abused to nongovernmental organizations for counseling and place those who are still in danger in safe homes.

Still, some children fall through the cracks. Moses has not received any counseling or other services. His grandmother says she tries to help Moses to forget about the incident by encouraging him to play with friends. She also discourages him from talking about what happened.

“He acts strange,” she says. “I am afraid for his future.”