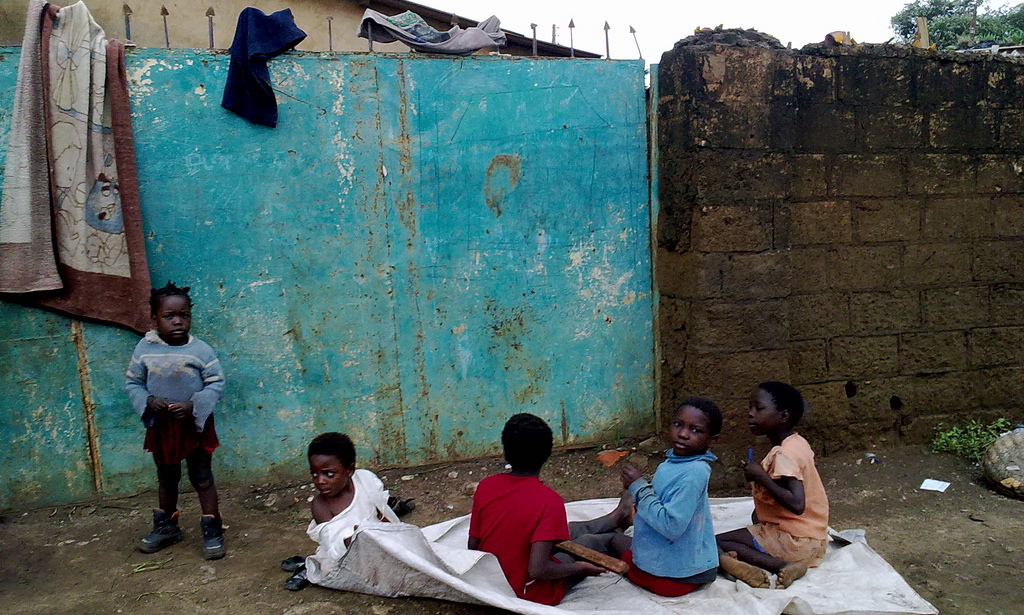 LUSAKA, ZAMBIA – At 12, Bwalya Mulenga says he already knows what it feels like to provide for his family. He knows the city like the back of his hand. Every day he guides his blind parents to and from downtown Lusaka, the capital.

“I guide my parents to a site in town where they sit the whole day and beg,” he says.

Bwalya says that once he leaves his parents, he quickly moves to another part of the city to beg. He walks into the roads when cars stop at traffic lights. He reaches out to the drivers to ask for 500 kwacha, 10 cents USD, or 1,000 kwacha, 20 cents USD, before the vehicles drive off.

Bwalya is tiny, but when he speaks he sounds like an adult. He says he begs on the streets because he has to help support his family.

“I help my parents to pay rent, buy food and the cloths we put on,” he says as he lies in the grass with bare, muddy feet.

Bwalya, the middle child, says he and his two brothers don’t go to school. Instead, they must help to raise money for the family.

Every morning at 5:30 a.m., Bwalya guides his blind parents from a small home they rent in Misisi compound to their begging spots before going to his own. They beg until around 5 p.m., then meet and go back home together.

While his mother prepares supper for them, the family talks about their earnings for the day. Bwalya says their earnings are usually sufficient to cover food and rent, but little beyond that.

“We survive by begging,” Bwalya says. “Without begging we go hungry and they chase us from their home.”

The same is true for many other children of blind parents in Zambia.

Bwalya is among the thousands of children who roam the streets daily begging for money, some who must help support their household because their parents are blind. Nongovernmental organizations, NGOs, and pastors strive to help these children, but say it is difficult to empower or educate them because they must spend their days earning money for their families. Although the government has created past initiatives to help children and is focusing on blindness prevention, advocates say more needs to be done to empower blind parents and secure a future for their children.

Zambia is home to 13,000 children who live on the streets and 20,000 child-headed households, with nearly half of all children ages 7 to 14 engaged in economic activities, according to UNICEF. Most of these children are orphans because of the increase in HIV mortality rates, according to the U.S. Department of State. Others have parents who have disabilities, such as blindness. Although Zambia is a signatory to the U.N. Convention on the Rights of the Child and the African Charter on the Rights and Welfare of the Child, many say the needs of these children are not adequately met here.

Agnes Nakonde, a single mother who is blind, says begging is the only way she and her four children can earn money to support themselves. Though young, her children routinely follow passersby to ask for alms. Most times, they are denied.

“It’s not always that people gives [alms],” Bwalya says. “Sometimes they insult us and treat us like we are not humans.”

Bwalya says that even when they do earn a little money or food, the older kids often take it from them.

“They threaten to beat us if we do not give them our money,” Bwalya says.

Today, Bwalya says a well-wisher gave him food. He shares the nshima, a cornmeal product and Zambian staple food, and two pieces of meat on a plastic bag with three friends. But his luck soon vanishes as an older kid snatches one of the bones away while he tries in vain to get it back.

One of Bwalya’s friends, Mubanga, 13, who refused to give his last name, says that lunch is a special treat.

“Sometimes the little money we make we spent it just on lunch,” Mubanga says.

Mubanga says his parents are also blind and that it is his job to help them.

“If I don’t help my parents, who will?” Mubanga asks, holding out his hands for emphasis. “Our parents are blind, and we have to help them. They depend on us to guide them. While they are begging, we also need to beg to raise enough money to sustain us.”

While children of the blind know what it’s like to help support a family from a young age, they are also exposed to other mature activities at an early age, like consuming alcohol and drugs. Children here say they resort to drugs such as marijuana or inhaling fumes, which they say help them to cope with street life and extinguish hunger. Bwalya, though, says he does not.

Bwalya says that Sundays are good days because pastors reach out to them.

“On most Sundays, they take us to their churches and give us food and clothes,” Bwalya says.

Lloyd Mutaka, head teacher at Fountain of Hope, an NGO that offers food, shelter, clothing and education to vulnerable children, says the organization offers some outreach programs to children of the blind. But he says it is difficult to empower them because they have to escort their parents to beg on the streets, which leaves little time to come to the center to learn.

Harvey Ngwale, director of programs for Zambia Disability HIV/AIDS Human Rights Program, says the organization, which is led by his blind father, advocates for rights for disabled people but doesn’t have special programs for their children. He says that their care is up to the government and institutions that look after vulnerable children, which he says should give preferential treatment to children of the blind.

“Community-based organizations should identify children of the blind and provide them with certain incentives, but the government should find a permanent solution to help the blind people on the streets and their children,” Ngwale says.

Ngwale says the Lusaka City Council’s campaign “Keep Zambia Clean” chases vendors from the streets, including the blind, instead of trying to help them.

“Although the council say[s] that the blind make the town dirty by squatting in town, begging is the only way they can source a living,” he says.

The government has created some policies and initiatives to help the children and their blind parents, but some say they haven’t been effective.

Mutaka also says it is the responsibility of the government to ensure that children have access to their basic needs. He says the government should assist NGOs so they can continue working to help the children.

Five years ago, the government recruited more than 1,200 children for a skills-training and rehabilitation program. They successfully completed the program, but only a handful of them managed to earn a living from the skills they acquired, according to IRIN, a U.N. news service.

The government has also been concentrating on prevention. Of the more than 100,00 blind people in Zambia, 80 percent of cases are curable, according to the World Health Organization. From 2006 to 2011, the Ministry of Health has focused on providing eye services countrywide through its National Strategic Plan on Prevention of Blindness in Zambia. Zambia is also signatory to VISION 2020, a global initiative for the elimination of avoidable blindness by 2020.

Bwalya, who still dreams of receiving an education, says his hope remains high as he waits for someone to come to he and his family’s aid.

“I need people to help me and my blind parents,” he says. “I want to be in class just like any other child and have a bright future so that I look [after] my parents properly.”