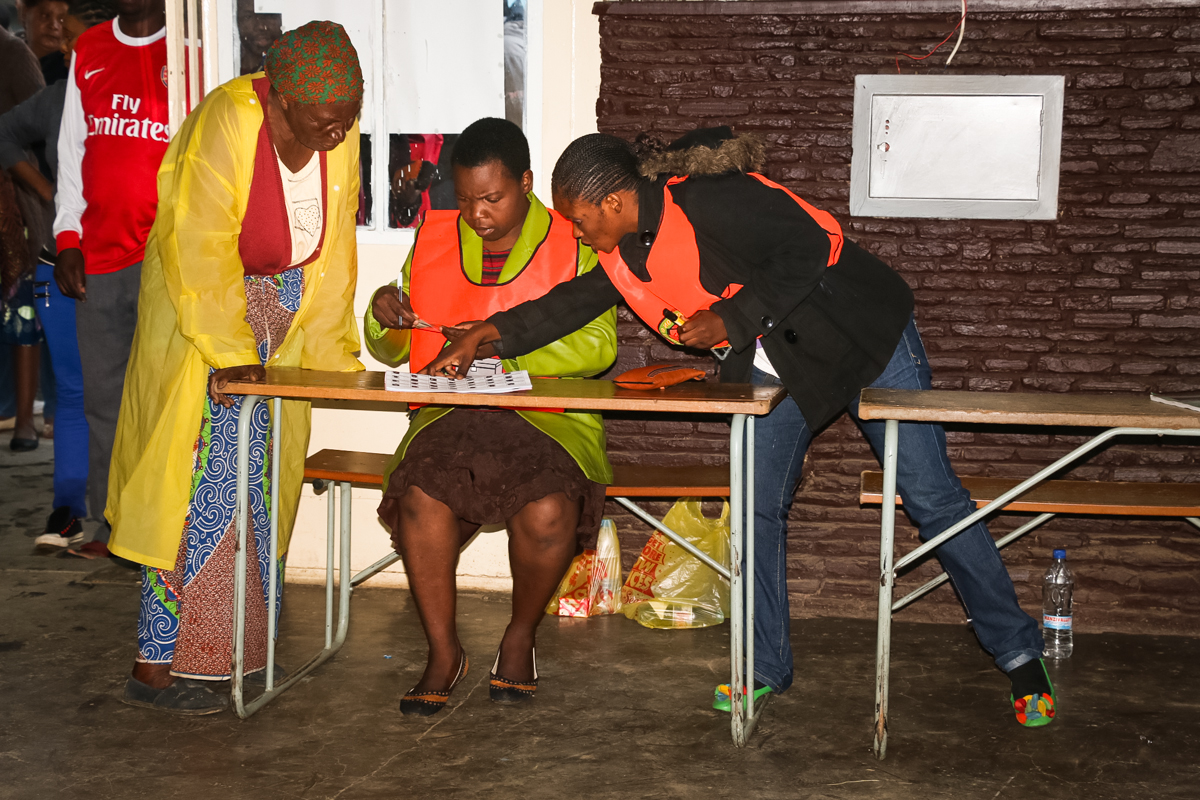 That’s what Senior Banda, a trader at Lusaka City Market, says as she reaches into her waist bag to give change to a customer buying tomatoes at her vegetable stall.

An announcer on Banda’s small radio has just announced that the Electoral Commission of Zambia plans to roll out free voter registration in preparation for a 2016 general election. On hearing Banda’s response to the announcement, her customer tries to convince her that voting is important. A heated debate ensues.

Speaking at the top of her voice, Banda, 48, declares that she has voted twice. The first time was in 1991, she says, because she thought it would bring change. The second time was 20 years later, in 2011, when she voted for a change in administration. Neither vote brought the changes she wanted.

“It puts me off to think of voting again,” she says.

“Look at how we are suffering here,” she says. “Maybe you people that drive and drink water from taps can vote. Count me out.”

Banda says she has never owned a car and does not have running water in her home; she draws water from a well behind her house.

“I cannot stop selling my products to line up in the sun or rain just to give someone a hefty salary when I have none,” she says.

Voter apathy is on the rise in Zambia, as evidenced by declining turnout in presidential elections. Voter turnout decreased by 54 percent from the 2006 election to the 2015 election.

The election held Jan. 20 to replace President Michael Sata, who died in October 2014, drew the lowest voter turnout in the country’s history. Election organizers and observers blame the low turnout on bad weather and inadequate voter education, but some Zambians say they chose not to vote because, like Banda, they don’t see value in it.

Voter apathy is a threat to democracy, activists say. It could enable a minority-backed government to take power.

Since Zambia won independence from Britain in 1964, it has held seven presidential elections. Presidents serve five-year terms, but two presidents have died in office, prompting by-elections.

The highest voter turnout in a presidential election – 70 percent – was in 2006, according to the International Institute for Democracy and Electoral Assistance.

In the election held two years later, after the death of President Levy Mwanawasa, voter turnout dropped to 45 percent, according to the institute. In the 2011 general election, turnout rose to 54 percent and then dropped to 32 percent in January 2015. Only 1.6 million of the nation’s 5 million registered voters cast ballots in January.

Edgar Lungu, the candidate of the ruling Patriotic Front, won the election by 2 percentage points. He was sworn in as president on Jan. 25. In his campaign, Lungu promised to create jobs, empower women and reduce poverty.

Voter apathy stems from the government’s inability to raise the nation out of poverty, citizens and experts say.

Zambia’s economy is gaining strength, growing at rates as high as 6.7 percent in recent years, but most Zambians still struggle financially. As of 2010, 60 percent of Zambians lived in poverty, according to the World Bank.

The average Zambian lives on less than $4 a day, according to the United Nations.

Alfred Chanda, a 59-year-old construction worker in Lusaka, the nation’s capital, says he voted in 1991, hoping the change to real democracy would bring prosperity. Disappointed by the pace of progress, he has not voted since.

“The country had high expectations, especially since we were moving from one-party state to multiparty state,” he says. “But nothing changed. If anything, things got worse.”

Chanda, a father of four and a freelance laborer, says he sometimes goes for three to five months without income.

Zambia’s economy was battered in the mid-1970s when the price of copper, one of the nation’s principal exports, plummeted. In 1997, the government sold its interests in copper mines in the hope that private industrialists would improve efficiency and worker training, reviving the sector’s profitability and generating tax revenue. While copper production has risen steadily over the past decade, privatization has benefited foreign mine owners much more than the workforce or the government.

“All I see is people benefiting themselves,” he says. “The gap between the poor and the rich keeps widening.”

Leaders of Zambia’s main opposition party, the United Party for National Development, say voters feel uninspired to vote because the government has failed to meet their expectations.

Banda says his party stressed these unfulfilled promises to win voters in January, especially in the farming blocks of the Southern, Western and Northwestern provinces.

In fact, Zambian maize farmers sold their grain to the government-owned Food Reserve Agency in July 2014. Because of a delay in the treasury’s release of funds, the farmers were not paid until December 2014 and January 2015, Agriculture Minister Given Lubinda says in a phone interview.

The government did sack more than 500 striking nurses in 2013, but it reinstated them in December 2014. The government announced a two-year wage freeze in October 2013 to tackle wage imbalances; the freeze is still in effect.

Davies Chama, the secretary general of the ruling Patriotic Front, attributes the low voter turnout in January to timing – the election was held in the middle of the rainy season, when many farmers are not free to participate. Turnout actually exceeded the party’s expectations, he says.

“During our projections of voter turnout, we put it at 30 percent, considering that there was no new registration of voters, people have changed places and some people have died, and it was rainy season, when a lot of people were farming,” Chama says.

It was not possible to register new voters within 90 days, the period within which an election must be held after the death of a president, says Chief Justice Ireen Mambilima, who was the chairperson of the commission during the January election.

The Patriotic Front government has fulfilled the promises it made to voters when it first came to power in 2011, Chama says.

“Some slums have tarred roads, and we have built schools in areas that did not have schools,” he says. “There was some delay in paying farmers, but every farmer was paid way before the election. The nurses’ issue was a matter of discipline, but they have been reinstated. How do essential workers like nurses down tools when people are dying?”

He says the government could not deliver a new constitution in 90 days, as the party promised in 2011, because it needed to involve the public in its formulation.

Even though voter turnout was generally low in the January election, more voters turned out in opposition strongholds than in regions that support the ruling party.

The opposition convinced more people to vote because it promised to do what the ruling party had failed to do, Banda says.

“People in our strongholds voted in big numbers because they wanted change,” he says. “It was the only way to do it.”

Despite growing apathy, some citizens still believe in the power of the vote.

Andrew Mwansa says he voted in the last election and is advising people to keep voting for the leaders they want.

“Not all politicians have selfish motives, so we have to keep voting,” he says. “Someday we might vote the right person in office. Voting is the only solution.”

Mwansa, 36, says his vote is his voice in matters of governance.

“I voted so that I don’t blame anyone for lack of development,” he says. “If you don’t vote, then you should never complain or celebrate if things are good or bad.”

Electoral observers say the voter turnout in the January poll would have been higher had the Electoral Commission of Zambia, or ECZ, carried out enough voter education.

Three groups that monitored the election – the Foundation for Democratic Process, or FODEP; the Chikondi Foundation; and the Zambia National Women’s Lobby – said in a joint post-election statement thatthe voter education exercise was short and there was no time to review its impact on voters.

The groups say the inadequacy of the voter education is evident in the low voter turnout and the high number of rejected ballots – 17,313.

However, Chief Justice Ireen Mambilima, who was the chairperson of the commission during the January election, says the ECZ did its best to educate voters.

“We played our part, but maybe this time we were constrained by time because we needed to do everything and touch every corner of Zambia within 90 days,” she says.

Mambilima acknowledges that heavy rains hampered turnout but calls for research into why most voters failed to cast ballots.

She urges political parties to do their part by inspiring people to vote.

“Voter apathy is an indictment on the political parties,” she says. “Why should people not feel inspired to take part in the electoral process of this country? We have to get to the bottom of this problem.”

FODEP executive director McDonald Chipenzi calls voter apathy a “threat to democracy.” He fears it could result in a minority rule.

“It is a revolt from the people on governance,” he says.

Canisius Banda, the United Party for National Development vice president, says people would be motivated to vote if voting changed their lives.

Chama says the government is working hard to complete development projects such as the construction of roads, schools and health centers all over the country. This will spur people to vote in future elections.

“We are working hard to finish what we have started,” he says. “Come 2016, we will convince people that voting can change lives.”

None of the sources in this article are related.

Editor’s Note: An earlier version of this story incorrectly attributed two quotes by Canisius Banda regarding his political party’s strategies to encouraging people to vote.