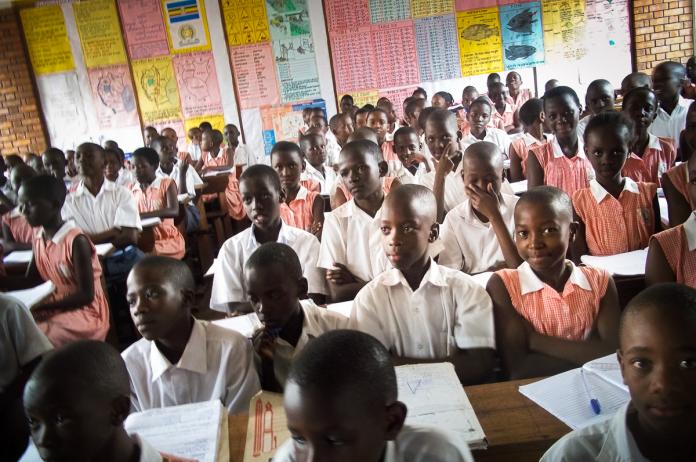 KAMPALA, UGANDA – First, it was a legal challenge over the Ugandan government’s inability to provide basic maternal health services.

Then, citizens took to the courts to oppose the nation’s Anti-Pornography Act, which many Ugandans say is so broad and vague that it can be used to prosecute women who wear miniskirts or dresses that show cleavage.

Next, civil society organizations challenged the HIV and AIDS Prevention and Control Act, passed last May, which criminalizes the transmission of HIV and enforces mandatory testing.

A lawsuit over implementation of the infamous Anti-Homosexuality Act soon followed.

Now, a local organization and a member of Parliament are suing the Ugandan government over proposed cuts to the education budget.

In recent years, civil society organizations in Uganda have begun taking to the courts to challenge government actions that they say fail to serve the population’s needs and wants.

The Initiative for Social and Economic Rights, a Ugandan nongovernmental organization that promotes social and economic rights, has been advocating the right to quality Universal Primary Education, known as UPE, since the Ugandan government enacted the program in 1997.

Representatives of the NGO regularly met with members of Parliament and officials of the Ministry of Education and Sports and the Ministry of Finance to push for full implementation of UPE, which guarantees publicly funded primary education.

For years, the government was unresponsive to requests to increase UPE funding, says Salima Namusobya, executive director of the organization. When cuts to the education budget were proposed last March, the organization decided it was time to use more aggressive tactics, she says.

“UPE has always been on our agenda,” Namusobya says. “We felt it was important to have courts involved since there have not been any improvements.”

While the Ministry of Education and Sports and some members of Parliament have advocated an increase in the UPE budget, the proposed national budget calls for cutting per-pupil annual spending from 7,560 shillings ($2.88) to 6,800 shillings ($2.60).

So in May, Namusobya joined forces with the Hon. Ssewungu Joseph Gonzaga, a member of Parliament who serves on the Committee on Education and Sports, to sue the Ugandan government to stop the proposed reduction in the UPE capitation grant. A July hearing on the lawsuit was postponed.

Nongovernmental organizations in Uganda have not traditionally used litigation as an advocacy tool, Namusobya says.

“This is an area most NGOs have not been originally active about,” she says.

But that is changing.

Civil society organizations are beginning to challenge the Ugandan government over controversial human rights and service delivery legislation. The proposed reduction in Universal Primary Education spending is the most recent legal challenge brought against the government by a local organization.

The lawsuit claims that budget cuts to UPE would compromise the caliber of education that Ugandan students receive.

That would violate students’ right to the quality education guaranteed by the legislation authorizing the UPE, Namusobya says.

Introduced 17 years ago, UPE makes education accessible to low-income families. Enrollment in the nation’s primary schools increased from 3.1 million in 1996 to 7.6 million in 2003, the most recent year for which figures are available.

More than 400 locally and internationally based NGOs operate in Uganda, according to the Ugandan National NGO Forum. At least 190 of these organizations work on human rights and good governance.

NGOs have filed at least five high-profile lawsuits against the government since 2011, when using the courts to challenge controversial legislation emerged as a tactic of local organizations.

The courts have rarely proved to be an efficient route for change.

In 2011, the Center for Health, Human Rights and Development, a local organization that promotes the right to quality health care, became one of the first NGOs to sue the Ugandan government.

It accused the government of failing to provide quality medical services after two women died from basic maternal health complications in public hospitals, says Maxensia Nakibuuka, a program officer with the NGO.

The center filed suit because the government refused to submit to nonjudicial conflict resolution, Nakibuuka says.

“When we don’t go to court, they do not see anything for mediation,” she says. “It’s the conditions we face that compel us to use courts of law.”

More than a year after the filing, the constitutional court ruled that it lacked jurisdiction to intervene because the legislative and executive branches are responsible for determining budget allocations, Nakibuuka says. The organization is looking for new legal avenues to bring the case before the courts again.

Similarly, Human Rights Advocacy Program, an NGO that also promotes the right to basic health care, is challenging the government over the HIV and AIDS Prevention and Control Act, which was passed in May 2014. It objects to clauses that criminalize HIV transmission and allow health care providers to disclose patients’ HIV status to others.

Bringing issues like this to the courts raises public awareness and generates debate on human rights violations, says David Mwebaza, a program officer with HRAP.

“There is no guarantee that we will win the case, but Ugandans will get to know about their rights being violated now that we have taken legal action,” he says.

In response to the HIV/AIDS lawsuit and other cases involving medical care, government ministries have issued directives clarifying that health care workers must not discriminate among patients in delivering services.

While many cases have lingered for months or even years, one high-profile legal challenge succeeded this year.

Advocates for the lesbian, gay, bisexual and transgender community argued that the law, which made homosexual activity a crime punishable by long prison sentences, violated the LGBT community’s rights to privacy and freedom of expression, assembly and association, all of which are guaranteed by the Ugandan Constitution.

In August, the high court overturned the law on procedural grounds: Parliament lacked a quorum when it passed the law in December 2013. While human rights advocates considered the ruling a victory, members of Parliament say they are drafting a new bill to replace the overturned law.

Some experts attribute such lawsuits to the right to free speech guaranteed by the constitution the nation adopted in 1995. Others say the court challenges result from a decline in government responsiveness to the needs of the people and the increased vibrancy of civil society organizations – NGOs that promote human rights and advocate for particular groups.

The legal challenge to education budget cuts is necessary because the quality of education in Uganda is already poor, Namusobya says. Further budget cuts would have a devastating effect.

In 2012, Uwezo, an independent East African initiative that assesses basic math and literacy competencies of school-age children across Kenya, Tanzania and Uganda, released a report confirming Namusobya’s worst fears: Ugandan children are performing worse than other children throughout the region.

Ugandan children performed far below regional averages on all tests, according to the report. Among Ugandan children ages 10 to 16, fewer than four in 10 performed at the second-grade level on math and literacy exams.

One of the reasons Ugandan students are performing poorly is that UPE has sharply increased school enrollment, causing classroom crowding and high student-to-teacher ratios, says Patrick Emmanuel Muinda, assistant commissioner of communication and information management at the Ministry of Education and Sports.

In April, enrollment reports revealed that more pupils than anticipated were going to school, Muinda says. Even without cutbacks, increased enrollment means the budget allocation per student is already lower than intended.

“Enrollment is higher,” he says. “When you divide, you have an overall net figure per child lower, as if government has reduced capitation grant, which is not true.”

In addition to increasing access to education, the introduction of Universal Primary Education has reduced many of Uganda’s social ills, Ssemugoma says.

“As citizens, we appreciate government for the innovation of inclusive education,” she says. “Child labor in the communities has reduced. Early pregnancies have also reduced. When children remain in the village, they develop bad habits like theft. In the long run, we shall have law-abiding citizens.”

Reducing the amount spent per student each year would diminish the quality of education, Ssemugoma says. Plus, a reduction in the availability of teaching materials and other school necessities would demoralize school faculties and staffs.

“We will not be able to purchase the necessary scholastic materials (or) pay for utilities,” she says. “Morale of teachers may go down.”

Teachers and local parents already worry that a lack of materials will affect student performance.

Beatrice Binagwa, a local businesswoman and mother of two children at Kitante Primary School, says overcrowded classrooms and the lack of materials are her primary concerns.

“Teachers might get demoralized since they may not have enough teaching materials, like chalk and illustration materials, for lower classes,” she says. “The quality of education will certainly be affected.”

Binagwa says all resources for students – including attention from teachers – are already in short supply.

“Children are so many, as you can see,” she says, pointing to hundreds of pupils in their dark pink, checkered uniforms at a Kitante school assembly in July. “Children who are slow or need a lot of help may not get much from these schools.”

Kitante Primary School has 3,500 students and just 61 teachers, she says. With class sizes averaging 57 students per class, it is already difficult for teachers to address individual student needs. A decrease in resources would only exacerbate the problem.

“A teacher sees individual differences in children and gives individual help,” Ssemugoma says. “When resources are not enough, it hinders quality of education.”

Ssemugoma says a meaningful interaction among the stakeholders would be more useful in resolving grievances.

“It should be solved through dialogue, where collective decisions are made,” she says.

Parliament has not publicly responded to the legal challenge to the budget cuts.

Ssemugoma may get her wish.

In June, the High Court denied Initiative for Social and Economic Rights’ request for a temporary injunction that would halt the planned budget cuts.

The court set a hearing to review the injunction in July, but it later postponed the hearing. The court has not set a new date for the hearing.

To keep things moving, Namusobya says she is working to schedule a mediation with government representatives to discuss alternatives to the budget cuts.

Ssewung, a member of the Democratic Party and one of the lead petitioners in the case, says he is determined to speak up about human rights violations in Uganda, including cuts to education.

“People must speak their minds,” he says. “I must say what I need.”

GPJ translated an interview from Rutooro.