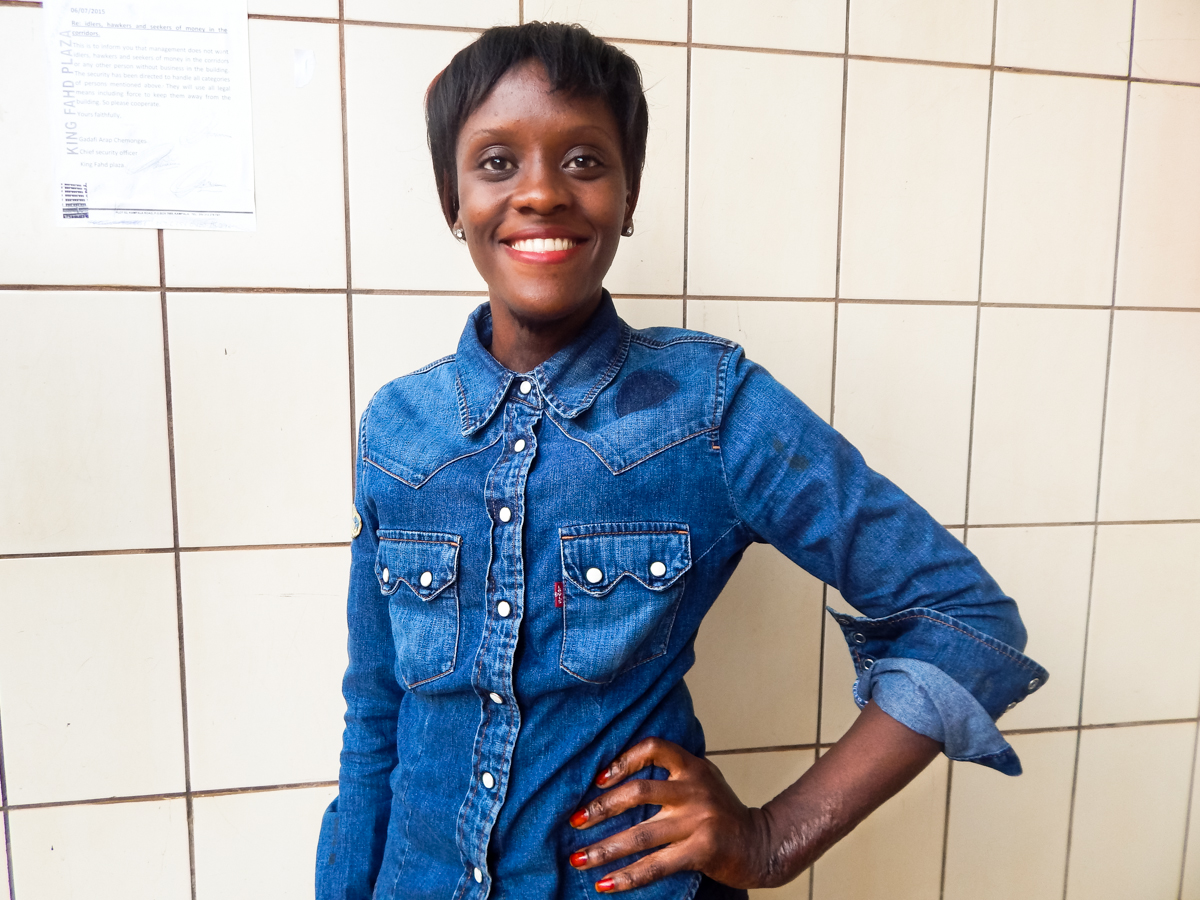 KAMPALA, UGANDA – When she was 10 years old, Aisha Nabukeera cooked meals for her family of five. She washed loads of laundry. And she endured abuse from her stepmother.

“I did not say anything to my father because he loved her so much and she was also harsh,” Nabukeera says.

Nabukeera’s parents had separated, and she stayed with her father and stepmother during school holidays.

One evening in February 2006 when she was 12, her stepmother sent her to the shops to buy kerosene, known locally as paraffin, a flammable wax often used in Africa as cooking fuel. When Nabukeera returned, her stepmother gave her a dress and told her to wear it.

“I told her it smelled of fuel, but she insisted that I should wear it,” Nabukeera says. “After commanding her children to get out of the house, she asked me to light a wick candle. She too walked out and started peeling matooke (a type of banana) at the veranda.”

When she struck the match, her dress caught fire.

“I remember screaming while running out of the house toward a nearby well, hoping to dip myself into it,” Nabukeera says.

A man saw her and poured a basin of water on her to douse the fire, but Nabukeera was already severely injured. She was burned from her neck to her knees and spent six months in a hospital. Nabukeera’s father and stepmother were charged with assault, but the case has yet to be concluded, nearly a decade later, Nabukeera says, for lack of evidence.

The rate of investigated child-related cases jumped by 38.9 percent between 2012 and 2013, according to the Annual Crime and Traffic/Road Safety Report 2013 from the Uganda Police Force.

In July, Nabukeera, now 21, competed for the Miss Uganda crown and won the Miss Rising Woman category of the competition. She is using the title as a platform to raise awareness about child abuse and encourage abused children to speak out.

About three-quarters of Ugandan children in the urban districts of Kampala, Wakiso and Mukono experience child abuse, according to a report released in March by the African Network for the Prevention and Protection against Child Abuse and Neglect Uganda (ANPPCAN Uganda).

The rate of investigated child-related cases jumped by 38.9 percent between 2012 and 2013, according to the Annual Crime and Traffic/Road Safety Report 2013 from the Uganda Police Force.

The Uganda Bureau of Statistics in 2013 reported that child labor is closely linked to child abuse and exploitation, and that 2 million children (about 16 percent of Uganda’s child population) work. The Ugandan government has in the past few years established a host of programs designed to aid working children. Some of those programs provide direct cash assistance to poor families, establish educational programs for children who otherwise wouldn’t attend school full-time and otherwise protect children from having to work.

It’s not clear whether those programs specifically resulted in the reporting of more child-abuse cases.

Child neglect is the most commonly reported child-related crime, according to police records and studies conducted by ANPPCAN Uganda. ANPPCAN Uganda also identifies child labor; exposure to violence; and denial of proper meals, education and healthcare as forms of child abuse, says Miriam Ahumuza, the programs and information officer at the organization.

Parents are the main perpetrators of child abuse, according to studies ANPPCAN Uganda has conducted, Ahumuza says. Teachers, neighbors and motorbike transport operators, known locally as bodaboda, have also been cited as perpetrators, she says.

Nabukeera works to educate children on their rights and help them identify abuse.

“It is important that abused children are made aware that they are being abused,” she says. “When children know their rights and where to go when they are abused, they can protect themselves from further abuse.”

She also encourages abused children to speak out. Nabukeera has visited one school since she started the advocacy in July. An unemployed high school graduate, she uses her pocket money to run her campaign.

Sharon Lamwaka, executive director at the Rehabilitation Center for Victims of Domestic and Sexual Violence, says Nabukeera’s advocacy is important because many abused children do not speak out.

“Sometimes, the children feel that it is their fault that they’ve been abused,” Lamwaka says. “They may also fail to speak out when the abuser threatens to kill them or their parents.”

Teenagers and children approaching adolescence don’t report abuse when the person in authority is too harsh on them, she says. This could be the parents, relatives or teachers.

Sometimes, children internalize the pain as a way of coping with the situation, she says.

Sometimes, the children feel that it is their fault that they’ve been abused.Sharon Lamwaka, executive director at the Rehabilitation Center for Victims of Domestic and Sexual Violence

Frank Gashumba learned of Nabukeera when she was in the hospital and news organizations published multiple reports about her case. He became her foster father nine years ago. He says her advocacy will help protect children from abuse.

“Nabukeera’s advocacy informs children of their rights and shows parents that child abuse is a crime,” he says.

Ahumuza says that although public awareness of child abuse has increased, children need to be empowered with information about their rights, such as learning about a national helpline where abuse can be reported.

Campaigns to encourage behavioural change in parents can also be helpful, she says.

“Some of the files die at the police station because of corruption and underfinancing of the family and child’s protection unit,” he says. “This delays investigations, and sometimes the perpetrators are never tried in court.”

But Kate Nandi, the head of the child- and family-protection unit at Central Police Station, Kampala, says police are not to blame for the delays in prosecution.

“Sometimes, files die because police don’t have enough evidence,” she says. “Sometimes parents lack witnesses to testify; sometimes there is compromise between the accused and the complainant outside police. We have piles of files sitting on our shelves where the complainant did not follow up.”

Nandi says parents should create time for their children so they can know when they have been abused.

“There is a growing lack of parental guidance,” she says. “Parents don’t sit with their children, talk to them, create rapport to find out the problems they are facing, so sometimes the children will keep quiet when abused and go to a neighbor seeking for solace, and the neighbor ends up abusing them.”

As she continues with her advocacy, Nabukeera hopes the government will put in place measures that will ensure that those who abuse children are brought to justice.

“It is unfortunate that in my case, the perpetrator is still at large,” she says. “I hope my story and my advocacy awakens the concerned parties – the government and society – to end this problem. I hope my story creates more awareness, children get empowered and the society becomes more responsive to any issue of child abuse.

“It’s a long journey, but I think we can do a lot to end the abuse.”