Skip to main content
The story you are reading was published on Monday September 10, 2012. To read more recent stories click here.
By Access to HIV Meds Unpredictable, Political 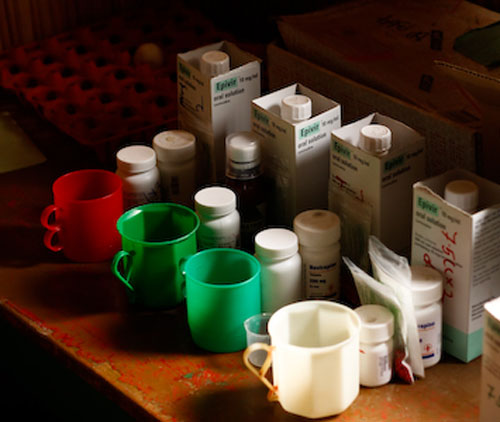 Four years ago, just days after her husband’s death, Mueni, 46, was summoned to speak with the doctor who had treated him.

“I remember [exactly] what the doctor told me,” she says. “‘Madam, we are sorry, but we have to tell you that your late husband had HIV. We recommend that you get tested so that we can help you.’”

Hearing this, Mueni says she went numb. “I told [the doctor] I would come back after the burial,” she says. The test proved Mueni was also HIV positive.

Mueni married her husband in 1993. It was not a marriage built on love, she admits. She married him to escape her life of poverty. “He was rich,” she says casually.

Only after they were married did Mueni learn that her husband had been married before and that his first wife had died only a few months before their wedding day. Her husband was sick frequently, but no one ever discussed the possibility of AIDS.

Known as the cosmopolitian capital of East Africa, Nairobi is home to hundreds of thousands of HIV positive people who live amidst poverty and a convoluted political system that makes access to treatment difficult.

With her four young sons, Mueni, now a widow, lives in the slums of the city. She, like so many Kenyans, has difficulty accessing and affording the antiretroviral medications that will prolong her life.

Antiretroviral therapy (ART) is a cocktail of at least three antiretroviral (ARV) drugs that have proven to suppress the HIV virus and stop the progression of the disease. Though globally available, ARV drugs are unevenly distributed throughout Kenya.

Nelson Juma Otwoma, coordinator of the Network of People Living with HIV/AIDS in Kenya, says more than 600,000 people in Kenya need ART, but only 360,000 are eligible for treatment.

Despite the World Health Organizations updated guidelines for ARV cocktails, Kenya has not adopted the modern guidelines and continues to prescribe outdated drugs with toxic side effects because they are cheaper.

Nelson Juma Otwoma, coordinator of the Network of People Living with HIV/AIDS, Kenya (NEPHAK), says D4T is still the most commonly prescribed ARV drug, despite its reputation for extreme side effects.  Side effects include peripheral neuropathy, which is a sharp burning pain in the hands and legs, pancreatitis; elevated liver function tests and fat loss. The new WHO guidelines recommend Tenofoviri, or TDF, be used instead of D4T, but this cocktail has a higher price tag and has remained out of reach for most Kenyans.

“[This] can be attributed to poverty level, lack of equipment, lab testing materials, stigma, lack of access to hospitals [in] rural areas and proper nutrition,” Otwoma says.

Consistent dosages and a rigorous treatment plan are essential for the ARTs to combat the disease. Otwoma says the post-election violence of 2007 caused many patients to lose track of their drug regimens or lose access to their providers.

In 2007, the rate of Kenyans receiving care for HIV was drastically affected. Reports from local NGOs indicated that after the election violence many people were scattered, causing them to lost track of where to pick up medication. Otwoma says NEPHAK is in the process of building a database of all patients on treatment that can be accessed throughout the country.

When the dust settled after the election, a new system of government acknowledging both parties emerged. As a result, many government offices continue to have overlapping efforts.

The post-election compromise included the creation of a Ministry of Medical Services and the creation of a Ministry of Public Health. According to an official familiar with the processes in both ministries, “the two have been bickering over money for years now. Only the patients are disserved.” This internal fighting has caused a shortage of both essential drugs and personnel in most public hospitals over the last three years.

In February, the Global Fund to Fights AIDS, Tuberculosis and Malaria, a worldwide public/private partnership that distributes aid and funds, denied Kenya’s application for $270 million to update drug regimens and increase care for the HIV positive population.

One source familiar with the granting process says the Global Fund was not confident that the money would be used properly in Kenya because of the political rift and overlap. The two ministries, headed by Professor Anyang’ Nyong’o, in Medical Services, and Beth Mugo, in Public Health, presented budgets that showed a clear overlap of roles and indicating that much of the requested money would be used bureaucratically. Kenya has appealed the decision, but chances of receiving the funds, sources say, are considered low.

Even after the controversial denial of funds, the fight over HIV/AIDS therapies in Kenya continued when the government awarded a contract to manufacture ARVs to HETERO Drugs in India, without notifying the Kenyan Medical Supply. In March, the High Court ruled that KMSA could continue producing ARVs, since Kenya has faced a severe shortage of these medicines since the deal was made.

While the future of funding and access to the preferred HIV/AIDS treatments in Kenya remains unclear, Mueni says she is doing her part to advance the conversation about staying healthy and getting access to medicine. She is currently working as a volunteer with NEPHAK training people in the HIV positive community.