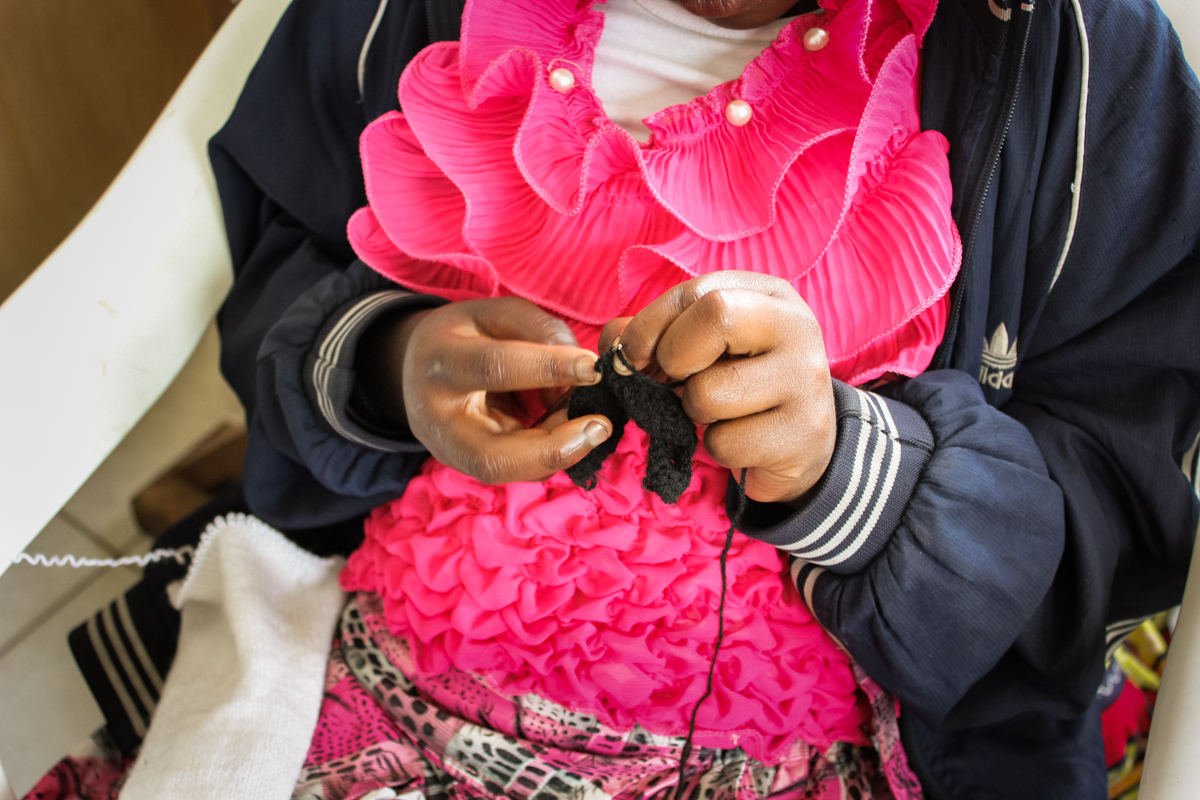 GOMA, DEMOCRATIC REPUBLIC OF CONGO – At 9 o’clock on a Monday morning, John Aubedi, 19, and 24 other young people living with HIV/AIDS file into the Children’s AIDS Program Center at HEAL Africa hospital in downtown Goma.

They are here to make art – and to gain access to vitally needed medication.

Everyone in the room quickly focuses on artwork. Some weave carpets. Others paint or make collages with peanuts, rice, fabric and ink. Some build wooden miniatures of chukudus, two-wheeled vehicles used to transport freight in the eastern part of the Democratic Republic of Congo.

Aubedi, who participates in this unique art class every Monday and Friday, says engaging in artwork relieves his anxiety.

“When I am busy drawing, I forget that I’m sick,” he says.

In exchange for participating, Aubedi receives antiretroviral medication and medical care. His growing artistic skills also have helped him earn income; with profits from sales of his work, he is helping to pay his sister’s school fees.

Like many other young program participants, Aubedi says his newfound passion for art helps him focus on the future.

Art classes are just one aspect of the Children’s AIDS Program Center at HEAL Africa, a private medical center run by an international nongovernmental organization. The program serves AIDS orphans, many of whom are HIV-positive.

DRC was home to more than 350,000 AIDS orphans as of 2013, the most recent year for which statistics are available, according to UNAIDS, a United Nations program that coordinates global action on the HIV/AIDS epidemic.

Young people ages 1 to 20 are welcome to make art alongside peers at the CAP Center.

Distribution of antiretroviral medications in DRC has been gravely inadequate.

For the past several months, people living with HIV/AIDS have staged sit-ins outside the provincial governor’s office in Goma to demand the antiretroviral therapy, or ART, they need. Although DRC has received private and government funds for ART, the North Kivu province has not distributed the medications since 2013. To help fill the need, programs like the CAP Center are finding creative ways to get medicine to their participants.

More than half a million DRC residents live with AIDS or HIV, the virus that causes it, but most are unable to obtain the antiretroviral medications they need to fight the infection, public health authorities say.

Global partners including the Clinton Foundation and UNICEF have provided funding for antiretroviral therapies (ART). But the local government has not disbursed funds allocated for HIV medicine and care in the 2013 provincial budget since 2013.

The government’s failure to disburse 2013 funds is having long-reaching consequences, Mbula says.

“External donors have reduced their support of the HIV sector because the 2013 funds have not yet been disbursed,” he says. “But we continue to advocate for resource mobilization locally for this year, 2015.”

Approximately 440,000 people – including 66,000 children – in DRC are HIV-positive, according to UNAIDS. PNMLS estimates the total HIV-positive population at more than 600,000.

Throughout North Kivu, doctors and activists lament the high rate of infections and the inadequacy of medical and psychological care.

The CAP Center provides program participants with ART as well as an opportunity to learn life skills. The center opened its doors 10 years ago with just seven young enrollees. By 2014, it was serving 862 young people, 66 percent of whom were AIDS orphans, says Dr. Elali Vindu, head of the CAP Center and the department of pediatrics at HEAL Africa.

“I suffered tremendously,” Aubedi says. “I had constant headaches, and I could not study. Doctors brought me here so that I could learn to draw like others to de-stress my life and rid my mind of bad thoughts.”

For the sake of privacy, doctors at the center asked GPJ to identify participating minors solely by first name and last initial.

Six-year-old Aline M. is learning to sew at the CAP Center. Cutting and sewing fabric are her favorite tasks.

She says she misses her mother, who died of AIDS, but adds that the thought of earning money by sewing outfits for classmates cheers her up.

“I often draw what I watch on television,” he says. “Sometimes I draw the faces of children, flowers and nature.”

The CAP Center also improves the health care available to program participants. The center provides medical follow-up and care, including at least a six-month supply of ART drugs.

UNICEF supports the center, providing funds for medical care, logistics and operations, including art supplies, sewing machines and other equipment.

Vindu is pleased that skills learned at CAP have enabled many program participants to earn money and even enter occupations. She hopes others will follow Aubedi in setting up small businesses.

“Some of these children came here suffering tremendously, but through antiretrovirals, nutritional care, treatment of opportunistic infections and benefits from the program, they are healthier,” Vindu says.

Art enhances the children’s well-being and even deepens their understanding of their health, Vindu says.

“We even teach them to understand their HIV status through sketches,” she says.

Mbula, of PNMLS, says the government is coordinating its efforts with smaller, innovative projects like the CAP Center to continue increasing awareness of HIV/AIDS. The local government recently launched a campaign aimed at preventing new cases of HIV infection.

“This is an opportunity to mobilize resources in all sectors to step up the fight against HIV/AIDS,” he says.